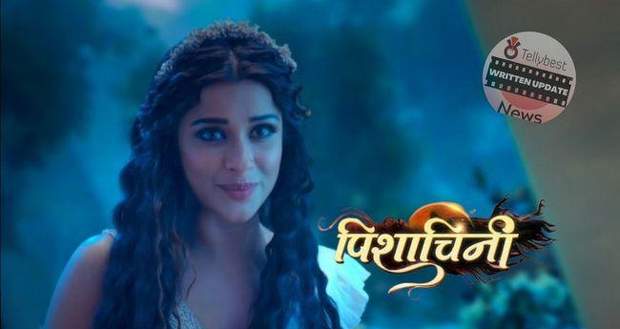 Today's Pishachini 25th August 2022 episode starts with Pavithra getting ready while she gets lost remembering how Rishi held her and crossed the muddy water.

Shaking out of her thoughts, Pravithra prays that she can focus on her mission of defeating Pishachini and not stray away from it.

On the other hand, Rocky is making Sancit ready for the meeting while Sanchit seems agitated by it.

Rocky, who is in a happy mood asks Sanchit if he's in love with someone else already but Sanchit calms him by saying that he wants Rocky to do something that will make their parents proud of him.

Elsewhere, Pavithra is looking for a way in Panditji's diary on how to recognize Pishachini when Bindiya comes there and tells her to get ready as the girl's family is coming soon.

Rocky tells Sanchit that he can never become like him and share an emotional moment with him.

Just then, Bindiya comes there and takes Sanchit downstairs.

The family gathers in the hall, and converse while Shikha keeps looking at the clock and waits for the impending doom that is Pishachini to enter their home.

Back in Pavithra's room, she reads a paper and learns that the Pishachini has to enter any house for the first time in her real horrifying look and that she can only come in if somebody from the house invites her in.

Pavithra realizes that the girl's family will be coming to the Ful mansion for the first time and rushes to the hall.

Meanwhile, Shikha drops the bowl of Kheer she is holding, and Himani's mother slips on it which catches everyone's attention.

Everyone goes to tend to the guests while Rani makes Shikha invite her inside the house.

Rani enters the Ful mansion in her horrific form and laughs maniacally while Pavithra notices Shikha standing by the door and goes to her.

However, Rani transforms into her beautiful self and introduces herself as Himani's younger sister, Rani.

Later, both the families talk while Sudhakar tells Sanchit and Himani to go to the garden and talk so that they can get to know each other.

Meanwhile, Pavithra keeps worrying about Pishachini as she wonders whether Pishachini has entered the Ful mansion or not.

Further, Rani eyes Himani's parents and they suggest getting Rani and Rocky married along with Sanchit and Himani which surprises everyone.

Rocky gets excited to see Pavithra's jealous reaction while Rani smirks thinking that she has removed Pavithra from her path.