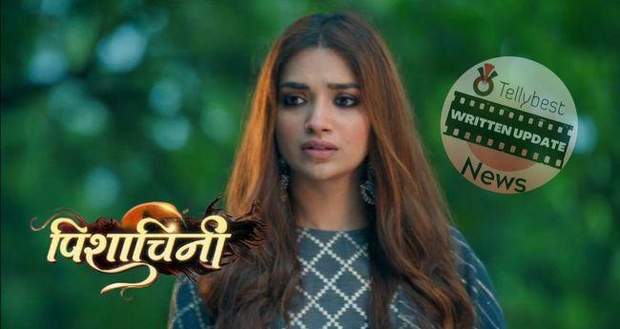 Today's Pishachini 26th August 2022 episode starts with Pavithra going towards the garden while thinking about Rocky and Rani's marriage talks.

Just then, Rocky comes there and jump scares her while she annoyedly asks him why he isn't with Rani.

The family members praise Rani and talk about her while Dadaji hopes that the girl is not Pishachini in disguise.

At the same time, Rocky holds Pavithra's hand and tells her that her eyes are mesmerizing.

However, Pavithra being jealous removes her hand from Rocky's hand and tells him to look into Rani's eyes instead of hers.

Rocky tells her that it's not like that and Pavithra asks him then why he couldn't take his eyes off of Rani.

He tries to reason that he was shocked hearing the news about marriage but starts blabbering about Rani's beauty.

Seeing Pavithra's jealous reaction, Rocky tries to calm her but she leaves saying that he can do anything he wants without giving her any explanation.

Back inside, Dadaji tries to warn the family members about Pishachini but fails after which he grabs a hold of the pouch containing the holy ashes.

Meanwhile, Rani is getting frustrated as she has to wait for the Rajput family's response and vents her frustration on Himani's family and Shikha.

Just then, the Rajput family comes there with Dadaji making Rani stop her assault on Himani's parents and acts like a nice girl.

On the other hand, Rocky goes to Pavithra's room and talks to her saying that he's going to reject the marriage proposal from Rani and indicates that he likes her.

He asks Pavithra what she thinks of his decision while Pavithra plays hard to get and tells him that she has no interest in his decision.

At the same time, the Rajputs tell Himani's family that Dadaji will make the final decision.

Himani goes to touch Dadaji's feet and he gives his blessing as a positive response but starts acting hesitant seeing Rani coming towards him.

Shikha gets worried as Rani nears Dadaji and extends her hands to touch his feet.

Dadaji sprays the holy ashes on her making her horrendous features come out.

However, the others do not see it as Rani has covered her face with the dupatta.

Just then, Rocky comes from the opposite side and Rani gets worried when Shikha comes there and distracts him.

Further, Rani makes Dadaji give her blessings forcefully which makes the family think that he approves of Rocky and Rani's marriage proposal.

Rocky stops them and Pavithra thinks that he's going to reject the proposal.

Surprisingly, Rocky shocks everyone stating that he accepts the marriage proposal.