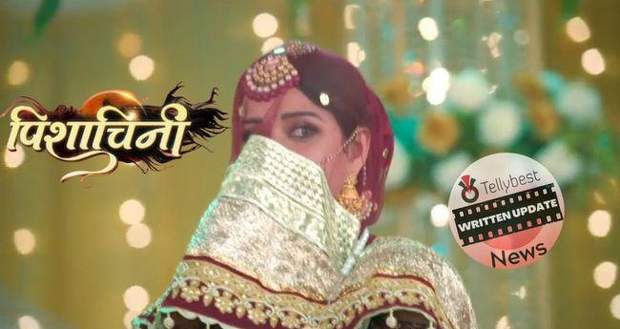 Today's Pishachini 26th September 2022 episode starts with Rocky feeling as if he's coming out of a dream due to the black magic wearing off.

Just then, he feels as if Pavithra is calling out to him for help.

Pavithra slowly sinks into the water while Rani holds Rocky's hand and rushes to complete the last three Phera's.

Vidhya notices the change in Rocky's behavior after the holy water falls on him and gets suspicious.

On the other hand, the bells in Lord Hanuman's temple start ringing as a group of monkeys make a chain by holding each other's hands and pulling Pavithra out of the well.

Back at the Rajput house, Rocky stops just before the last Phera and notices a monkey signaling to him, and goes towards the abandoned mansion.

Panditji and Rani insist Rocky complete the last round as the marriage is not complete before that but Rocky discards all the accessories and follows after the monkey.

The Rajput family rush after Rocky while Rani removes her dupatta angrily and goes after them.

Rocky reaches the abandoned well and gets shocked to see Pavithra lying near the well unconscious.

He picks her up in his arms and takes her towards the floored place while the rest of the family also arrives there.

Rocky checks Pavithra's breathing as he realizes that she isn't breathing.

A monkey gives a tree branch to Rocky and leaves while Vidhya surprisingly says that the extract of that branch has healing abilities.

Rocky squeezes the branch filled with thorns while a drop of Rocky's blood falls on Pavithra's hairline.

Pavithra wakes up after getting the tree extract and Rocky gets relieved while Rani remains annoyed that her enemy is still alive.

However, Babli notices the red stain on Pavithra's hairline and tells Swapna about it.

Swapna tells Rocky that they should go while Babli and Mukund ask Pavithra how she reached there.

The family members start insisting Rocky come back and complete the marriage rituals while Pavithra requests Rocky to trust her for one last time.

Swapna tells Rocky to remember what Pavithra did to Rani and takes him away while Rani holds Rocky's hand to break Pavithra's hold fully.

The marriage starts once again as the Panditji states that they have to do the rituals from the scratch.

Rituals of marriage get completed and the bride unveils herself to reveal that she is Pavithra and not Rani.