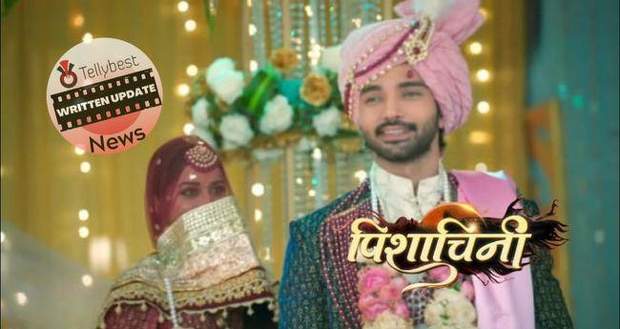 Today's Pishachini 28th September 2022 episode starts with Rocky telling everyone that he is responsible for Pavithra being the bride instead of Rani as he did everything out of his free will.

Swapna breaks down in tears as she asks Rocky if he talked to Rani or knows where she is.

Shikha says that she will go and check on Rani.

Elsewhere, Rani covers her ears and screams which makes all the monkeys leave.

Back at the Rajput house, Swapna and the rest of the family members accuse Pavithra of betraying them while Babli asks if Pavithra did magic on Rocky to make him agree to the marriage.

Sudhakar and Swapna keep abusing Rocky and Pavithra with their words while Sanchit asks Rocky why he didn't inform them about his decision.

Just then, Shikha enters with a crying Rani and Swapna rushes to hug her while Shikha tells the family that Rani got locked in the bathroom when she went to freshen up and her Lehenga was also missing.

Sudhakar questions Pavithra about why she did this and what is the truth while Pavithra tells the family that they might not understand her actions now but she is doing everything for their safety.

Swapna and Sudhakar humiliate Pavithra and state that the Rajput family does not accept this marriage.

However, Rocky states that he has accepted Pavithra as his wife and nothing can change that.

Rani sees Rocky and Pavithra's joined hands and leaves angrily while Sudhakar states that Rani has been hurt deeply.

Later, Rani destroys the forest in rage while Pavithra comes there and mocks her.

Pavithra says Rani is dumb and she can never become Maha Pishachini as Pavithra is part of the Rajput family now.

Pavithra asks Rani mockingly where her scoreboard is, stating that Rani is zero while Bhaktakumari has won the match by getting Rocky.

Rani tries to attack Pavithra but fails because of the protection orb around her.

On the other hand, Pratik finds Pavithra's phone and gets a little emotional after seeing Nikita's call.

However, Amrita stops him from accepting the call, reminding him about Nikita thinking they are dead.

The next morning, Vidhya prepares the pooja plate for Rocky and Pavithra's Grahapravesh but Swapna refuses to do the ritual.

Babli tells Swapna that no matter what happened, Rocky and Pavithra's marriage has been done with all the rituals.

Before Swapna can say anything, Rani starts crying and leaves while the rest of the family goes after her to console except Vidhya.

© Copyright tellybest.com, 2022, 2023. All Rights Reserved. Unauthorized use and/or duplication of any material from tellybest.com without written permission is strictly prohibited.
Cached Saved on: Monday 21st of November 2022 05:30:58 PMCached Disp on: Wednesday 7th of December 2022 12:01:12 PM