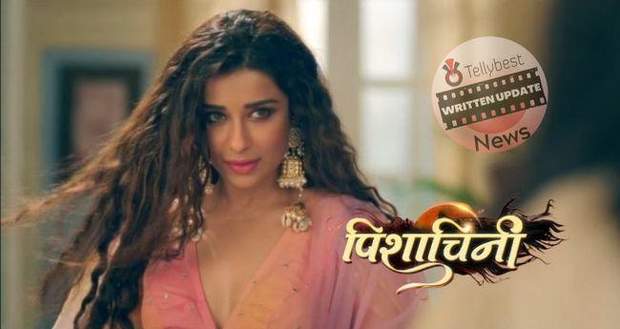 Today's Pishachini 29th August 2022 episode starts with Rani smiling toward Rocky as he has accepted the marriage proposal while the family gets shocked and happy.

However, Pavithra looks at Rocky feeling betrayed while he just keeps looking back and forth between her and Rani as he once again states that he agrees to marry Rani.

As soon as the family hugs Rocky, he looks confused and asks the family what they are happy about.

Flashback shows Rani doing her magic on the glass of juice and ordering Shikha to give it to Rocky which will bring him under Pishachini's control for some time.

Back in the present, rocky as shocked as his cousins praise his dramatic way to approve the marriage proposal while Rani smirks looking at the defeated Pavithra.

At family talks joyfully while Dadaji thinks that looking at Rocky's expressions it must be Pishachini's work to make Rocky agree to the marriage.

As Dadaji tries to touch Dadaji to warn Rocky, Rani tells the family members that Dadaji looks tired and offers to take him to his room.

Shikha looks on in worry as Rani takes Dadaji to his room.

Meanwhile, Rocky goes to look for Pavithra while she is seen packing her bags and sending a message to her aunt informing her that she's returning to London.

At the same time, Rani brings Dadaji to his room and throws a stick in the middle of the room which suddenly covers the whole room with greenery.

Rani tells Dadaji that none will be able to hear his screams anymore and mocks him saying that just like Pratik, she will trap the whole Rajput family and will transform them into Pishach/Pishachini.

Pavithra is walking on her way to Dadaji's room to bid him goodbye and tell him of her decision of returning to London.

Rani laughs and mocks telling Dadaji to dance at her wedding after which she will become the daughter-in-law of the Rajput family.

Just then, Pavithra opens the door and the room has transformed into its normal position.

Pavithra sits near Dadaji and tells him that she had come to Bareli as she had thought that Pishachini is in Bareli but seeing that there is nothing in Bareli, she has decided to return to London so that she doesn't take up space as the family will be soon filled with marriage guests.

Dadaji manages to spit out the word 'stop' seeing Pishachini coming closer and closer towards Pavithra.

However, Pavithra doesn't understand and leaves the room.

Just then, she bumps into Rocky and bids him goodbye while he gets emotional and tells her that he won't let her go.

Rocky tries to explain to Pavithra that he doesn't know why he said yes but she tells him to stick to his decision and locks the door on his face.

Rocky tells Pavithra through the door that he felt hypnotized at that moment which shocks her.

© Copyright tellybest.com, 2020, 2021. All Rights Reserved. Unauthorized use and/or duplication of any material from tellybest.com without written permission is strictly prohibited.
Cached Saved on: Sunday 2nd of October 2022 06:30:40 PMCached Disp on: Thursday 6th of October 2022 03:22:57 PM