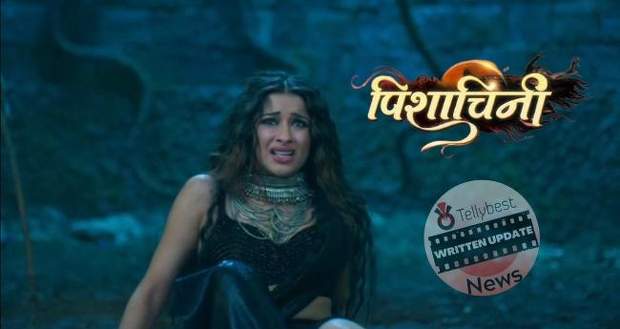 Today's Pishachini 29th September 2022 episode starts with Rocky not being able to see tears in Pavithra's eyes and going inside to do her Grahpravesh himself.

However, Vidhya and Sanchit help him to complete the bride and groom's post-marriage rituals.

Pavithra touches Sanchit's feet to take his blessings but he tells her that she does not need to do that and hugs her.

Meanwhile, Shikha looks at her cousins from the balcony and cries, recalling her moments with them and realizing the huge distance between them now.

Amrita comes there and brainwashes Shikha into thinking that only Rani is helpful, and not the Rajput family.

On the other hand, Rocky and Pavithra come to their room as Sanchit and Vidhya tell them that they are happy for them.

Sanchit says that what happened today was not right but he is happy that Rocky finally went with his heart and stopped three lives from being ruined.

Back in Sudhakar's room, Swapna cries saying that she won't be able to show her face anywhere.

Later, Rocky confronts Pavithra, asking her how she ended up at the mandap and making this huge decision to marry him when her primary focus was to save the family from Pishachini.

Unlike the confession that Rocky expected, Pavithra says that she married him because Rani is Pishachini.

Rocky's face starts to fall when Pavithra tells him that she married him because she has found out that Rocky is her destination and her love.

Rocky looks into Pavithra's eyes and his heart reaches cloud nine while Pavithra breaks the atmosphere and says she has upset the whole family and they might not even accept her now.

Rocky comforts the love of his life by saying that he is sure the family will soon accept her and their marriage.

Back in the family room, Swapna apologizes to Rani saying that she couldn't complete her mother's last wish, and states that Rani will live with them only.

Rani hides her smile as she inwardly says that the game has just begun now.

Meanwhile, Pavithra sees Rocky looking deep in thought and asks him what he is thinking about.

However, Rocky behaves mischievously and starts flirting with Pavithra to make her flustered.

Further, Rocky jumps onto the bed and lies on it while telling Pavithra that she can sleep anywhere she wishes.

Rocky closes his eyes thinking that Pavithra will have no choice but to sleep on the same bed as him.

As soon as Rocky turns back to check, he sees that Pavithra has separated the bed to make it into two.

However, he knows that the distances between them will soon be closed.

On the other hand, Rani stands outside an abandoned mansion and chants something that makes the sky turn orangish red.

© Copyright tellybest.com, 2022, 2023. All Rights Reserved. Unauthorized use and/or duplication of any material from tellybest.com without written permission is strictly prohibited.
Cached Saved on: Monday 21st of November 2022 08:35:40 AMCached Disp on: Saturday 10th of December 2022 02:31:39 PM