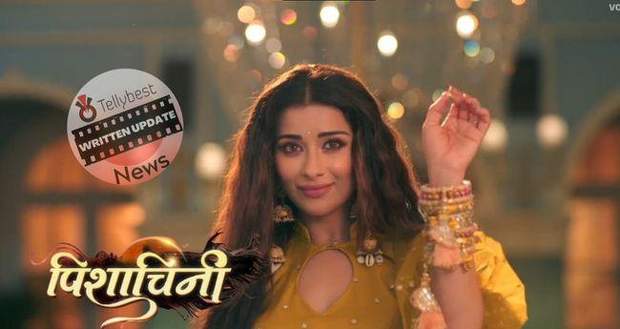 Today's Pishachini 2nd September 2022 episode starts with Pavithra dancing with the girls as the Rajput family admires their performance.

Rocky comes and joins Pavithra in the dance performance.

Rani also joins the performance and Rocky dances with her to make Pavithra jealous.

Taking advantage of this, Himani rushes out of the house while Rani gets held back by Rocky.

Himani reaches the abandoned haveli and shouts for her brother to save him and gets shocked when she stumbles upon the dead body of Vikas.

Afterward, Rani questions Pavithra why she came back and Pavithra makes an excuse that she missed her flight and has decided to stay back for a few more days.

Rani thinks that Pavithra has gotten suspicious of her.

Later, Pavithra tells Rocky that she wants to talk to him for just two minutes but he refuses to talk to her.

Rani is about to leave to look for Himani but Rocky stops her and tells her to come with him for the aarti while Pavithra looks on.

Just then, Himani comes there and shouts at Rani that she knows what Rani has done.

Rani thinks that Himani has learned about Vikas' death and is about to use her magic but gets hesitant seeing Pavithra looking at her with hawk eyes.

Himani tells Rani that she has destroyed everything and that the family should know something about Rani.

Rani lets go of Mandy who goes to Himani in his frog form and licks Himani leading to her health suddenly getting worse.

Himani can't seem to stop her hiccups while Rani goes to bring water for her.

However, once in the kitchen, Rani blows on the glass of water and brings it to the hall for Himani.

Pavithra knows about Rani's tricks and bumps into Rani making the glass of water drop from her hands.

After Himani drinks another glass of water, she has seem to have forgotten everything from the last few moments and Rani makes up an excuse that Himani was upset at her caused she wore her earrings.

Pavithra asks why would Himani be angry over such a small thing but Rani tells her to not bring up her detective tendencies and makes Himani agrees to her story.

Pavithra goes to Dadaji and tells him that she is doubting if Rani is Pishachini but Himani didn't reveal anything about her.

Flashback shows Rani blowing into two glasses of water and giving one to Shikha.

Later, it is time for the aarti, and Dadaji signals to Pavithra that Rani cannot do the aarti.

Before Rani can leave, Pavithra calls out to her and Rocky holds Rani's hand and takes her towards the temple as Pavithra and Dadaji look on at Rani with observing eyes.