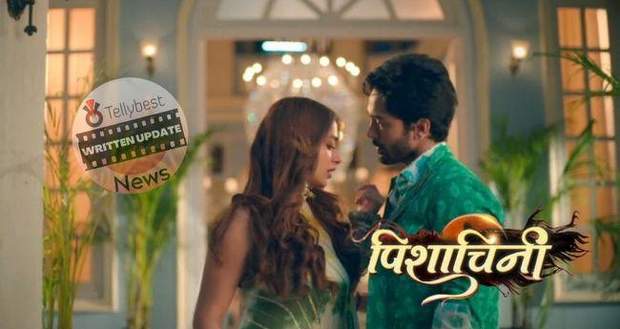 Today's Pishachini 30th August 2022 episode starts with Pavithra getting alert as she hears Rocky telling her that just felt as if he was hypnotized for a moment when he agreed to the marriage proposal.

Pavithra recalls how Dadaji was acting frantic today and wonders if there is a mystery behind it.

In the kitchen, Rani scares Shikha and tells her that she has been very impressed by her work today.

Rani calls for Mandy and he transforms into his human form holding a mirror.

Rani does a spell on Shikha's mark and it reduces which makes Shikha extremely happy.

Feeling proud, Rani tells Shikha that the more she agrees to Rani's orders, the sooner her mark will go away and vanishes with Mandy.

However, Shikha soon realizes that the truth about her being the person who brought Pishachini into their home will be revealed if they notice that the mark has disappeared.

Shikha covers her face with the hair once again and leaves the kitchen.

On the other hand, Pavithra thinks to question Rocky once before she leaves but stops herself thinking that she is just making up an excuse to talk to Rocky.

At the same time, Sanchit and Bindiya notice the sullen expression on Rocky's face and decide to talk to him but Shikha stops them saying that she will talk to him as she knows him the best.

Later, Rani is scaring Himani while making the offering with the rest of the Rajput ladies while Rocky comes there.

Sudha tells Rocky to go to the market and bring some things when he states that he wants to talk to Rani.

Rani goes with rocky and outside the Ful Haveli, Rocky stops her and tells her that he needs to tell her something.

Rani knows that Rocky is going to break off their marriage alliance and tries to stall him by flirting with him and talking about she and her family are over the moon with the marriage alliance.

Just then, Rocky hears the sounds of Himani's brother shouting for help whom Rani had left in the water well, and rushes that way.

Elsewhere, Pavithra reads Panditji's diary and learns that Rocky must have been controlled by Pishachini.

However, she wonders how it is possible since Pishachini is not inside the house and thinks that Pishachini might have already entered the Ful mansion.

At the same time, Rocky enters the abandoned haveli and goes near the well where the cries for help are coming from.

Rani tries to get Rocky to leave the place but he leaves to find a rope.

Pishachini curses out Mandy for not doing his job and digs her long and scary nail into the wall of the water well which starts the greenery trapping Himani's brother to grow more and more.

Inside the Ful mansion, Pavithra comes to Shikha and questions her about the juice but Shikha lies that the juice was normal.

Back at the abandoned haveli, Rani suffocates Himani's brother with her powers and ultimately kills him in order to prevent Rocky from going inside.

Rani tells Rocky that he must have been having auditory hallucinations and closer to him as she removes the rope from around his waist.