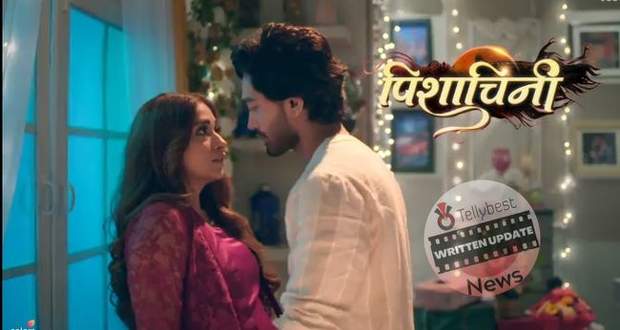 Today's Pishachini 30th September 2022 episode starts with Prateek, Amrita, and Ayodhya worried about Rani’s anger as many dead bodies fall from the sky and turn to ashes on the ground.

Rani announces that since Navratri has begun, Devi has come and all the other dark energies of the universe are looking to hide, wanting to simply go ‘underground’.

The hands and faces of Prateek, Amrita, and Ayodhya age and turn grey as they ask Rani whether they should go underground too.

Rani scolds all of them, announcing she is not the one to play the game of hiding and seek as she has to become the Maha Pishachini by Dussehra or she would have to wait for another two hundred years.

Meanwhile, Pavithra wakes up in the middle of the night and sees the sky roar, changing its colour to orangish red.

Suddenly, Rani hangs up in the air as her black hair flows with long fingernails pointing sideways.

She laughs evilly announcing that she will become Maha Pishachini for sure by adding her blood to the Rajput family’s next generation.

At Rajput House, Pavithra tries to sleep again but when she wakes up, she finds Rocky’s side of the bed empty.

Feeling as if something bad is about to happen, Rocky’s body hangs in the air with no head.

Slowly, his head appears and his eyes turn green while Rani joins him and mocks Pavithra, saying only Rani and Rocky will remain together as Pishach and Pishachini.

Pavithra charges toward Rani angrily, however, she falls on a sleepy Rocky and realizes it was just a dream.

Rocky teases Pavithra saying that she is at stage 4 of a love disease and Rocky is a love specialist.

Their banter ends after Pavithra calls him crazy while Rocky goes to change.

In the morning, Babli shames Pavithra for not listening to the elders when she asks about completing a ritual while Swapna rebukes Pavithra for playing with their emotions and breaking Rani and Rocky’s marriage.

They hear Vidhya’s surprised gasp but she hides and runs to tell Pavithra about it.

Vidhya cries profusely as she realizes that her uncle and aunt have become Pishach and Pishachini.

Pavithra promises Vidhya that she won’t let anyone become Rani’s next target when they both see molten hot lava crack out of the kitchen ceiling.

Upstairs, Rani is relaxing in the bathtub when her skin goes hot and the bubbled water starts boiling crazily.

She calls out for help, as she is unable to get out of the scorching hot water herself.

© Copyright tellybest.com, 2022, 2023. All Rights Reserved. Unauthorized use and/or duplication of any material from tellybest.com without written permission is strictly prohibited.
Cached Saved on: Monday 21st of November 2022 10:03:24 AMCached Disp on: Tuesday 29th of November 2022 09:10:07 AM