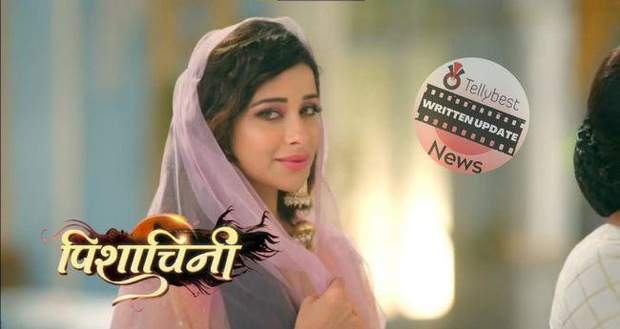 Today's Pishachini 31st August 2022 episode starts with Pavithra telling the family that she has to leave for London.

The family members try to convince her to stay back for the festival season as Rani eyes them with observation.

Pavithra tells them that she should go while Rani comes to her and acts innocent saying that they would have been best friends if she had stayed back.

Rani learns Sudha was talking about her son and punishes her by covering her and her husband's feet in magical branches which graze their skin causing blood to ooze out.

Later, Pavithra waits for her rental car while Rani smirks thinking her hurdle has been removed.

However, as Rani closes the door and goes inside, Pavithra looks through the windshield mirror and gets shocked to see a scary silhouette on the window.

On the way, Pavithra gets stopped by Rocky who tells her that he knows she doesn't want to go.

However, Pavithra acts cold towards him and tells Rocky that she has no feelings for him and that she is not leaving due to him agreeing to the marriage with Rani.

Meanwhile, at the Ful mansion, Rani is mocking an immobile Dadaji and tells him that she will soon be his daughter-in-law.

Back on the road, Rocky tries to tell Pavithra that he tried to tell Rani that he doesn't want to marry her but didn't get the time.

Pavithra points out the lipstick mark on Rocky's shirt and shows it to him while he recalls how Rani fell on him leading to the lipstick stain being there.

Rocky tries to explain it to Pavithra and stop her by calling her Piku but she gets aggressive and tells him to not address him by that word anymore.

Pavithra warns him saying that the nickname is the only thing she has from her parents and that she is not willing to give it to anyone who isn't close to her.

Thinking that Pavithra will not be convinced by anything he says anymore and leaves while Pavithra goes on her way.

Later, Rocky returns home and tells the family that he and Rani will do the Janmashtami pooja together putting Rani in tension.

At the same, Pavithra gets confused as she ends up at the abandoned haveli and is about to drive away when she notices someone dragging something through the jungle.

Mandy is dragging Vikas' lifeless body away and hiding it while Pavithra enters and shouts if anyone is there.

Mandy appears in front of her and points at the gardening tools when she asks him what he was dragging away.

Pavithra looks around as Mandy disappears once again and gets shocked to find Vikas' wallet there.

© Copyright tellybest.com, 2020, 2021. All Rights Reserved. Unauthorized use and/or duplication of any material from tellybest.com without written permission is strictly prohibited.
Cached Saved on: Sunday 2nd of October 2022 05:55:12 AMCached Disp on: Wednesday 5th of October 2022 06:22:18 PM