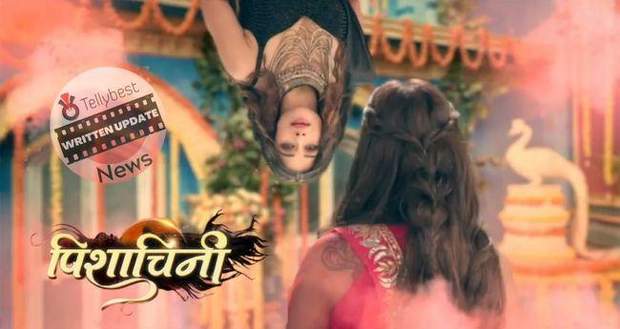 Today's Pishachini 7th September 2022 episode starts with Rani telling Pavithra that this is how she died.

Pavithra runs to Rocky and tries to wake him up while questioning how Rani got powers instead of punishment for all the crimes she did.

Rani laughs as she tells Pishachini that she is the queen of dark magic and gets her powers from the darkness.

Back in the past, Rani gets curious as she enters the Pishach world after her death and other Pishach tell her that she is punished to be Pishachini for eternity after her death due to her crimes.

Pishach tells Rani that she will never be human and that she will feed on the greed of other humans to keep herself beautiful and strong.

All the Pishach and Pishachinis start circling Rani and she turns into her Pishachini form becoming the queen of darkness.

Back in the present, Pavithra gets shocked as time goes back to normal.

Just then, Rani comes there and hugs her after which she goes back to dancing with the family members as Pavithra vows to expose her.

Back in the hallway, as Pavithra passes by the diyas they all start distinguishing.

Pavithra tells Rocky that Rani is the Pishachini and that she has seen her in her real form.

However, Rocky doesn't believe her and Pavithra sprays the perfume on him telling him that Rani will be there soon enough.

Rocky tells Pavithra that she is unpredictable and blames her for being jealous while Rani comes there and calls out for him.

Pavithra gets happy as she tells Rocky that she was right while Rocky leaves from there saying that he knows his fiance is there for him.

Later, Pavithra is complaining to Dadaji when he tells her that she can't give up and stands up from the wheelchair shocking her.

Dadaji reveals to Pavithra that when Rani broke the Kal Viram, she had mistakenly removed the crush she had put on him.

Elsewhere, Shikha tells both Sanchit and Bindiya that she has talked to Rocky and that he has picked Rani as his life partner.

Afterward, Rani and the ladies are looking at the sarees while Himani goes to the temple to find her phone.

In reality, it is a trick of Pavithra and Dadaji to talk to Himani without getting interrupted by Rani as they are in the temple.

Himani agrees to help Pavithra and Dadaji while Rani goes to find out what is taking Himani so long to return.

© Copyright tellybest.com, 2020, 2021. All Rights Reserved. Unauthorized use and/or duplication of any material from tellybest.com without written permission is strictly prohibited.
Cached Saved on: Saturday 1st of October 2022 10:20:11 PMCached Disp on: Wednesday 5th of October 2022 06:32:03 PM