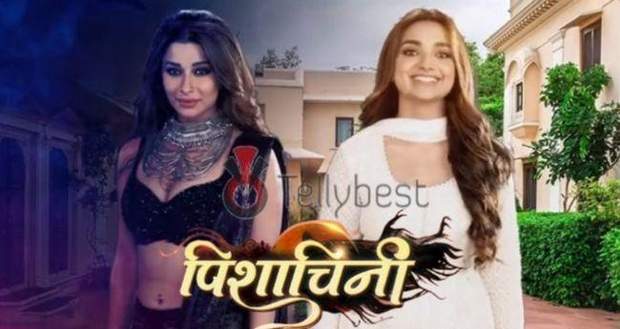 Today's Pishachini 8th August 2022 episode starts with a Pooja happening at a Bajrangbali temple in Bareli in the year 2002.

Panditji extends his hand toward the head of the Rajput family member and the old man gives Panditji a brick from the place where their house is being built.

Going towards the temple, Panditji does some mantras and the brick starts oozing black liquid after which it suddenly explodes which shocks the Rajput family.

Panditji tells them that the land they're building their house on is possessed by a ghost.

Later, at night, a watchman is sitting on the bed cot in the middle of the forest entertaining himself with the phone when he hears some lady crying.

He meets a lady who tells him that she is lost and he offers to let her stay the night with him and turns to go towards his cot while telling her about the rumors of the ghost residing there.

The beautiful lady suddenly transforms herself into Pishachini and grabs the watchman with her long hair.

At the same time, the Rajput family requests Panditji to do something about Pishachini as they have spent their everything to buy that land.

Further, as Pishachini kills the watchman by taking his soul and introducing herself as Rani, the Rajput family and Panditji come there to control her.

Pishachini attacks the main Panditji but gets shocked when the power gets absorbed into the pendant of his locket.

Suddenly, a mob of people with lanterns starts emerging from the shadows and runs toward Rani while she manages to grow a very long tree and climbs on it making the villagers unable to even see her face.

The Pandit starts circling the tree while reciting mantras which makes Pishachini's wand fall from her hand.

Panditji traps the wand in a holy box with difficulty and tells the Rajput family that no one should open the box and free her.

He reveals to the family members that Rani will try to lure anyone with all the riches and desires of the world to get free, which will cause their destruction.

After some time, the Rajput family is celebrating Bhoomi Poojan as Dadaji keeps asking everyone about the preparations.

Ravi's son, Rakshit who is also known as Rocky, is playing with his toy car when it suddenly falls into the pit where the holy box was buried.

Elsewhere, Dadaji's other son, Pratik, and his pregnant wife are seen taking the holy box containing the trapped Pishachini somewhere else.

Panditji comes to the Rajput family and tells them to be careful as Pishachini will come back for revenge and leaves after giving them something in a red cloth.

After twenty years, Rocky makes his entry into the college and everyone fawns over him and his amazing sports bike.

Rocky sits with his friends and tells them that he is thinking of selling his two-month-old model as he's planning to buy the new model that launched recently.

Two guys overhear their conversation and buy the bike from Rocky for 25 thousand and leave but get shocked when they find a children's bike in place of the sports bike.

Elsewhere, Rocky gives the money to his friend who is in need of him.

Later, when Rocky returns home, he sees that his father, Sudhakar is trying to convince Dadaji to accept Pratik back into their family after twenty years as he is getting his daughter, Nikita married.