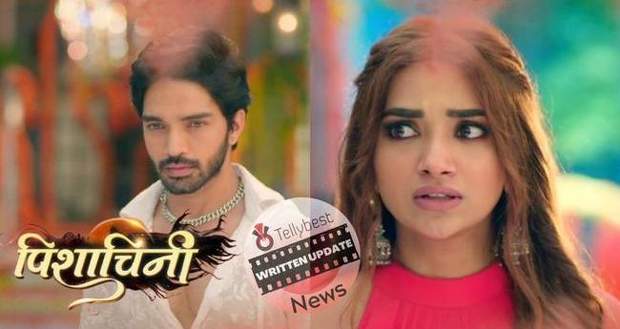 Rani hears Himani's sound and tries to go inside but gets shocked due to it being the temple place.

Pavithra makes up an excuse for Rani and leaves there while Rani thinks to keep an eye on her.

Later, Rocky is strumming his guitar while thinking about his moments with Pavithra when Rani comes there and tries to flirt with him.

Rani takes his hand and dances with him while telling him that they will soon be two bodies and one soul.

Rocky thinks about Pavithra while Rani pushes him onto the bed and asks him what he wants while gently running her fingers through his face.

Rani extends her fingernails and is about to fo her magic when suddenly Sanchit and Bindiya come there and get shocked to see Rani and Rocky in the room.

However, Rani comes downstairs and convinces everyone to stay in the Ful mansion.

Pavithra asks Rani about her social media saying that she found Himani's social media but could not find Rani's.

Rani jokes that Himani is very social due to which other family members do not need to be on social media.

Pavithra further shows the family albums and asks Rani why she isn't in any of the pictures and even her college does not exist.

However, Rocky tells her that it isn't necessary while Himani says that she can go back and get Rani's degrees and pictures of her with the family.

Sanchit also agrees with Pavithra and says that her questions are valid while Rocky says that he fully trusts Rani.

However, Sudha says that they should leave now and will come back later with Rani's photos and degrees.

Himani's family and Rani leave the Ful mansion while Rocky stops Pavithra and looks at her angrily.

In the car, Himani drives to the destination told by Dadaji while Rani keeps questioning her and demands an answer.

Rocky confronts Pavithra while she says that she is doing everything for her close ones.

Back in the car, Himani tells Rani that she did everything for her brother whom she killed and the parents get shocked.

Himani says that she will be free once she reaches her destination.

A flashback shows Dadaji telling her to go to the Hanuman temple so that Rani can't harm her or her parents.