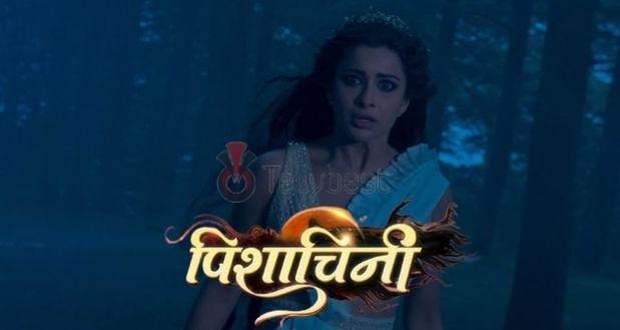 Today's Pishachini 9th August 2022 episode starts with Dadaji telling Sudhakar that it's not easy to forgive Pratik while Rocky comes downstairs interrupting everyone.

He asks the family members if they were talking about that lady who is a Pishachini and tries to lighten the situation.

However, sensing the discomfort of the family members, he leaves making an excuse while the other youngsters follow him.

The cousins/siblings scold Rocky as they want to meet Nikita, Pratik, and Ankita.

Rocky talks about going to Nikita's marriage in Himachal and finding a beautiful foreigner for himself.

On the other end of the world in London, a beautiful girl is seen paying respect to her parents and grandfather's death anniversary by doing Jal Abhishekh.

Pavithra's aunt calls out to her and tells her that her parents will be proud of her while telling her to be safe in Himachal and not go to Bareli.

Back in Bareli, Sudhakar informs Pratik on call that they are coming to Himachal for Nikita's wedding.

However, at Pratik's house, he and his wife tell Pishachini that the Rajput family is arriving there.

Rani acts happy to hear that her enemies are arriving so that she can finally take her revenge after twenty years.

Later, Dadaji does a mantra and puts an earthen lamp in front of the house to see if Pishachini's shadow is still lingering on their family or not.

The earthen lamp's fire does not get disinguished which makes Sudhakar and Dadaji think that Pratik was saying the truth about getting rid of Pishachini.

However, as soon as they all go inside the earthen lamp blows off indicating that Pishachini is still after them.

The next day, the Rajput family arrives at Pratik and Ankita's house and greets each other.

Ankita recognizes Shikha who is hiding part of her face, Sanchit, and Rocky and talks with the family while Dadaji keeps looking out into the forest for signs of Rani.

However, Rani is sitting on top of the house keeping her eyes on the family reunion.

Afterward, Nikita greets the whole family and tells Sanchit and Rocky that she would like to celebrate Rakhi with them.

Ankita and Pratik notice Rani looking over at Nikita and Rocky and get worried while distracting the family to keep them from seeing Rani.

Rani, however, gets fascinated with Rocky and laughs evilly while saying his name in a whisper.

Later, while the cousins are busy helping Nikita choose outfits for the wedding while Rani calls out to Rocky with her mesmerizing laughter.

Rocky gets trapped in Rani's plan and follows the laughter but bumps into Pavithra who is fixing a plant pot that got broken by her car.

Finding amusement, Rocky teases Pavitra but she stands up to Rocky and they argue mindlessly with each other.

However, Rocky starts acting nice once he learns that she's from London and helps her with the luggage.