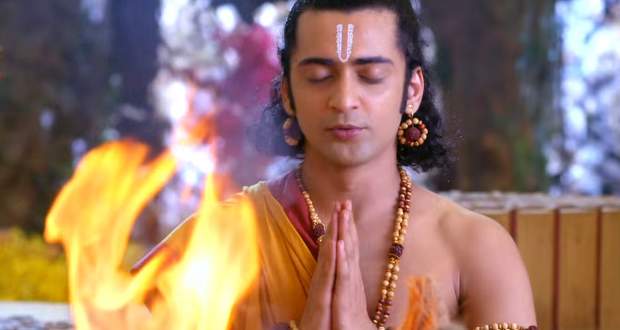 Today's RadhaKrishna 14 Dec episode starts with Krishna getting asked to sacrifice all the people in his life. Rishi Sandipani asks him to just concentrate on teachings.

Balram gets shocked while Krishna says he can never leave behind Radha’s love. Meanwhile, Jatila and Kutila mock Radha about Krishna leaving for 7 years.

Jatila is sure that his son will become the head of Barsana. Radha gives a curt reply to Jatila and is confident about Krishna’s skills.

Krishna performs the rituals as asked by Rishi Sandipani and further asks for Daan from Guru Maa. He is asked to make a promise to remain loyal for 7 years.

Radha wishes to learn the Vedas while Ugrapat agrees to teach her. Later, Krishna asks Guru Maa why she is mad at them. She says that her son is lost and nobody helped her.

She has a problem with all blessed souls as they never helped her. Krishna tells Rishi Sandipani that they have learned everything in 64 days.

They are told to recite all four Vedas in front of everyone. Krishna tells Balram that he will recite Vedas with Radha.

In the morning, Krishna asks Radha to recite Vedas with him to get an Astra. They both start the recitation while all the gods witness the spiritual moment.