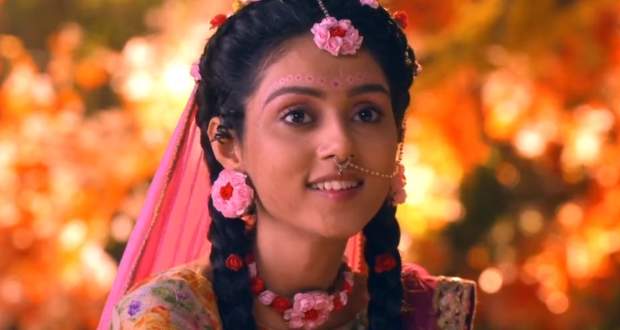 Today's RadhaKrishna 16 Nov episode starts with Vasudeva declaring that Krishna is arriving to kill Kans. Further, Devaki says they will not leave and will wait to see him die.

Kans asks to prepare for a ritual and invite all of Mathura. Meanwhile, Balram gets scared to see the weather changing while Krishna says he has done it to warn Kans.

Krishna says Radha will send Krishna away from Barsana. Later, Kans reaches a mountain to meet Lord Parshuram. He asks for Lord Shiva Dhanush for his Dhanur Yagya.

Lord Parshuram puts the Dhanush in front of Kans and he is able to pick it up. Meanwhile, Krishna tries to spend some time alone with Radha by sending other girls out of the Yamuna.

Krishna says the Ghat will be known as Yugal Ghat for the rest of eternity. Radha leaves but promises to meet him in the evening.

At the same time, Kutila wonders why Jatila was not able to reveal Radha and Krishna’s love story. Kutila wants to reveal their secret stories in front of society.

Radha and Krishna meet near the sunset point. Radha fulfills Krishna’s wish of eating butter off her hands. Also, Kutila follows them and finds out Krishna is not the real son of Yashoda.

Krishna wants Radha to reveal the truth in front of his parents. Later, Radha learns that Kutila and Jatila know the truth about Krishna’s parenthood.

Upcoming Radha Krishn episode update: Radha reveals in front of Nand Baba and Yashoda that Krishna is not their son.

© Copyright tellybest.com, 2018 & 2019. All Rights Reserved. Unauthorized use and/or duplication of this material without written permission from tellybest.com is strictly prohibited.
Cached Saved on: Tuesday 7th of July 2020 05:31:05 PMCached Disp on: Thursday 9th of July 2020 08:06:09 PM