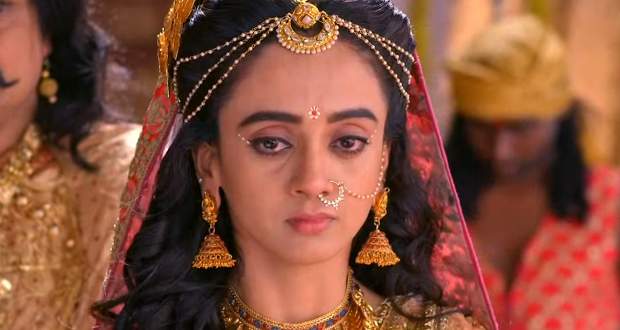 Today's RadhaKrishna 18 Jan episode starts with Radha asking Balram to give the letter to Krishna. She wants him to release Rukmini from her pain and Krishna decides to do as Radha says.

Radha further says that she can’t come to Balram’s wedding until Krishna does as she pleases. Meanwhile, Akroor is asked to search for Balram as Revti is about to arrive.

Shishupal is desperate to get married to Rukmini and Jarasandh also wants to get over with the marriage rituals. Later, Balram and Krishna are asked to reach soon for the Tilak ritual.

Rukmini and her father are brought in for the wedding while Rukmini’s father refuses to do the Tilak of Shishupal. Rukmini decides to reach the temple as soon as possible.

She wants to worship their goddess before the wedding while Shishupal refuses to accept her request. Elsewhere, the rituals of Balram’s wedding begins.

Krishna is adamant to fulfil Radha’s wish and stops the Tilak of Shishupal. Rukmi and Jarasandh asks Shishupal to let Rukmini go.

Shishupal doesn’t trust her and wishes to go with her for the rituals. Later, Balram meets Krishna and tells him about Radha’s demand.

© Copyright tellybest.com, 2018 & 2019. All Rights Reserved. Unauthorized use and/or duplication of this material without written permission from tellybest.com is strictly prohibited.
Cached Saved on: Sunday 5th of April 2020 03:05:34 AM