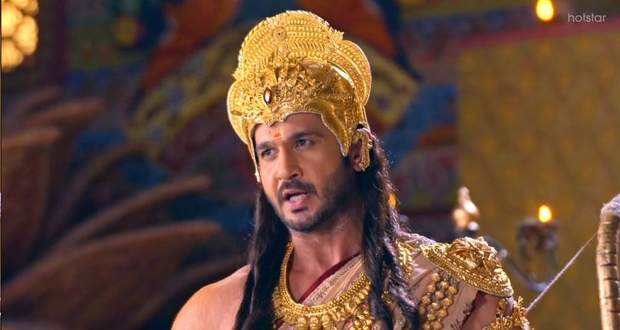 Today's RadhaKrishna 20 Aug episode starts with everyone asking Arjun to give his vote but he stays quiet. Bhishma advises Dhritrashtra to divide Hastinapur into two parts.

Shakuni orders Dushasan to inform Duryodhan about everything happening in the court. Duryodhan gets angry on hearing about the division of Hastinapur, whereas Krishna asks Duryodhan to calm down and stay there with him in the forest.

Karan challenges Arjun for a fierce war, while Shakuni interrupts in between and tells Dhritrashtra that Karan has no right to stake Hastinapur.

Arjun tells Dhritrashtra that he is not in the favor of war. Meanwhile, Duryodhan gets a message from Shakuni that he should arrive at the court as it’s the right moment.

Dhritrashtra announces his decision to not to divide Hastinapur into two parts. He tells everyone that Duryodhan will be the next king of Hastinapur. Duryodhan arrives there along with Krishna and gets happy with the decision of Dhritrashtra.

Krishna gets upset with Arjun for not being able to decide on his own. Everyone asks Krishna to give his vote in the elections.