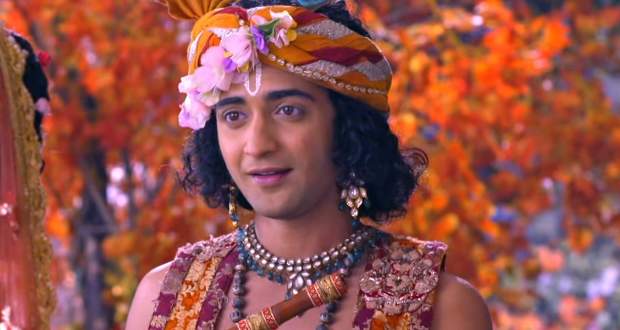 Today's RadhaKrishna 21 Dec episode starts with Revthi throwing stones in the lake. Krishna arrives and wants to know if she is waiting for Balram. He reveals that Balram doesn’t know she is waiting.

He develops a fear in Revthi that Balram might slip out of her hands. Krishna suggests Revthi get a date fixed and get married to Balram soon.

Krishna suggests Revthi approach first and she obliges. Meanwhile, King of Magad learns that Krishna is in Barsana. He gets angry and kills the reporter.

Rukmini sends one of her friends to warn Krishna about the attack planned by various kings. Later, Krishna gives information to everyone about a really big rally of a king.

King Kakudmi arrives from the Kaushal region in Barsana. He is the father of Revthi and is introduced to Balram’s parents. The king proposes to get Balram and Revthi married soon.

Radha gets mad at Krishna for declaring such a thing. Krishna tries to tease Radha by saying she might be curious about the girl he is going to marry.

Krishna says he will impress the girl by playing Bansuri. Meanwhile, a person comes from Magad to investigate about Krishna. Rukmini’s friend also finds Krishna and wishes to warn him.

She fails as she finds the reporters from Magad. Radha warns Krishna that the Basuri might break if he plays it for anyone else.

© Copyright tellybest.com, 2018 & 2019. All Rights Reserved. Unauthorized use and/or duplication of this material without written permission from tellybest.com is strictly prohibited.
Cached Saved on: Thursday 30th of January 2020 10:18:29 PMCached Disp on: Monday 17th of February 2020 07:18:34 PM