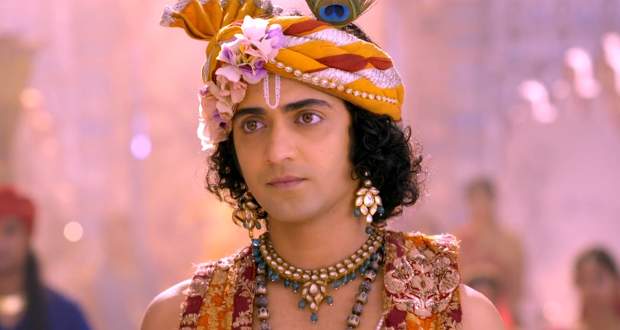 Today's RadhaKrishna 21 Sep episode starts with Balram using the plow on-field and asking from Krishna the reason he needs to do such hard work. After Balram is done plowing, Krishna plants pearls in the mud.

Ugrapat wonders if Radha can collect such big amount in a short period. Yashoda says they should wait while Vrishbhanu agrees to her.

Jatila and Ayan also discuss their plan while Radha gets worried about the solution. At the same time, she sees a huge tree of pearls.

Krishna moves the tree a little and Radha is showered with a lot of pearls. He further makes her believe that the pearls are real.

He tells the story of Holika and Prahlad. Holika asks her brother to prepare a fire where she can sit with Prahlad to kill him.

Meanwhile, Laxmi gets worried for Prahlad while Narayan says he has the power of Bhakti. Narayan further asks Laxmi to be prepared for the scary future.

Holika burns in the fire while Prahlad is saved by Narayan. The story ends and Krishna also asks Radha to stay strong for the future.

Radha reaches the court of his father with a lot of pearls. Ugrapat asks where she got the pearls while Krishna jumps in to cover up for her.

Everybody wonder who will make the hart while at the same time, Sammohana comes and says she is well skilled in the work.