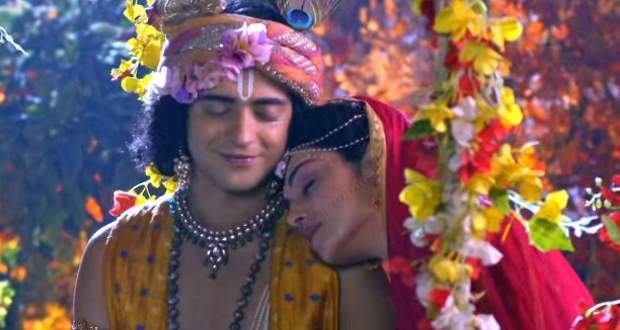 Today's RadhaKrishna 28 Dec episode starts with Krishna showing the broken flute to Radha. Radha gets upset to see it while she takes the two pieces from his hands.

Meanwhile, Magad Samraat decides to attack Barsaana the very next day while Rukmini doesn’t want him to attack Krishna. She even gets ready for the Swyamvar.

Magad Samraat wants to take revenge while Rukmini wants him to analyze the situation. King Jarasandh declares he will show some mercy on Krishna.

Rukmini has already accepted Krishna as her husband. Meanwhile, Krishna and Radha share an emotional goodbye and Krishna wishes to give a gift.

He also declares that a time will come when he will take Radha along with him forever. Radha gets happy with his promise and wishes to have his hand in hers for the rest of the night.

Balram arrives shouting and says they have to go as soon as possible. Krishna has to leave Radha and they both share a heartbreaking goodbye.

Balram is scared for the people of Barsana while Jarasandh’s army approaches Barsana. One of the villagers informs them that Krishna has proceeded towards Mathura.

Krishna has already asked his grandfather for help while he asks him not to attack the enemy. They let the army of Jarasandh go.

Meanwhile, Ayan accuses Radha of not caring about the people of Barsana. He further wants Radha to leave the position.