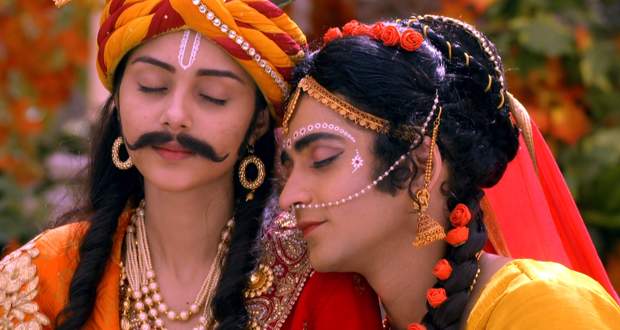 Today's RadhaKrishna 2 Nov episode starts with Asur telling Radha that she loves a wrong man. He says his family is not real and his real parents are trapped in Kans’s jail.

Radha curses Pralambasur that he will die because of his own powers. Meanwhile, Kutila is delighted with their win while she refuses to take Prasad from Jatila.

Balram tries to convince Radha about not thinking of Krishna’s parenthood but his love. Radha says she loves Krishna even more after knowing the truth.

Radha asks Balram not to tell Krishna that she knows. Later, Radha finds Prasad on the floor and keeps it in a box. Jatila accuses Radha of being out of the house most of the time.

Radha joins Krishna in feeding the fishes Prasad. She asks Krishna to end Gopika and Valabh’s story. Krishna says the world needs to know about their love first.

Later, Balram searches for Vallabh while Krishna says Vallabh and Gopika are together. Krishna dresses as Gopika and Kutila finds her in the market.

Balram and Kutila find Gopika and Vallabh together in the jungle.