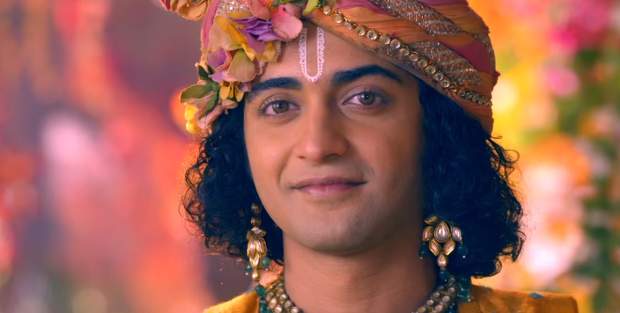 Today's RadhaKrishna 30 Nov episode starts with Krishna calling Mahadev and asking if he can break the Dhanur Kavach. Mahadev says that it is all Krishna’s Leela and the time has come to kill Kans.

Krishna picks up the Dhanush and it starts glowing. He starts bending it and breaks it into two pieces. He places both the pieces in the same place.

Krishna tells the small kid to say he broke the Dhanush. The guards get shocked to see the Dhanush broken. Meanwhile, Kutila gets irritated with Radha chanting the name of Krishna to make him strong.

Kutila wants Radha to break her Monvrat and offers her food. Radha speaks Krishna and Kutila gets relieved to not being able to hear Krishna now.

The villagers think that the kid is the avatar of Narayan as he was able to break the Dhanush. Meanwhile, Kans gets shocked to learn that the Dhanush is broken.

The small kid is brought in front of Kans and admits that he broke the Dhanush. He says he was playing with the Dhanush at night and the Dhanush broke down.

Kans tries to hit the kid but is unable to do so. At the same time, Akroor arrives and says he can never find Krishna but he has already found him.