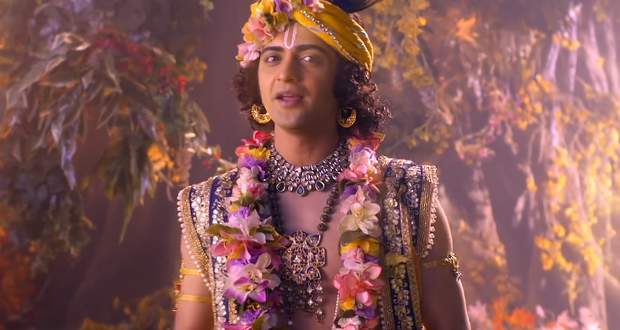 Ayan tells Jatila about Krishna meeting Radha at the hatt. Balram disguises as a woman and tells Radha to meet Krishna as soon as possible.

Ayan thinks Balram is Radha and keeps an eye on him. Meanwhile, Radha goes to meet Krishna and gets mesmerized by his flute’s voice.

Krishna gives her bangles and Radha gets delighted to wear them. He then starts telling the story of Narayan and Laxmi.

Laxmi Ji is in deep sorrow of being away from Narayan. Meanwhile, Satyawrat is making a boat for saving people from a storm. Madhuketap is killing everyone in his way for the universe’s destruction. At the same time, Laxmi meets Shiva to help her.

Shiva says it is not in his hand as he can’t go against Narayan. Parvati offers her entire powers to Laxmi to get Narayan back.

Meanwhile, Madhuketap decides to trouble everyone on earth but Narayan takes the form of a huge fish to save them. Shiva sends his snake to bind the boat with fish. Madhuketap burns the holy books Vedas to bring more trouble for Narayan.

Krishna says he will tell the rest of the story later as he has to save Balram. Balram is stuck in Radha’s room disguised as Radha.

© Copyright tellybest.com, 2018 & 2019. All Rights Reserved. Unauthorized use and/or duplication of this material without written permission from tellybest.com is strictly prohibited.
Cached Saved on: Saturday 6th of June 2020 07:07:53 PMCached Disp on: Saturday 4th of July 2020 05:44:14 PM