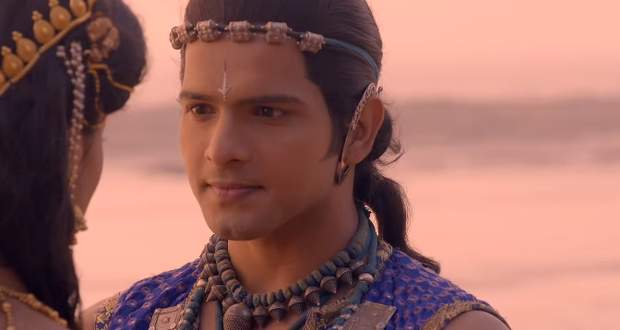 Today's RadhaKrishna 31 Dec episode starts with Ayan declaring that Krishna has to die in front of Radha. He also threatens to take revenge for all the pain he received from Radha.

Meanwhile, Rukmini is worried about being forced to get married to another man. Radha wonders if there is a secret way to kill Jarasandh.

Radha and Rukmini realize at the same time the way to kill Jarasandh. They deduce that Jarasandh can be separated into two parts.

Krishna meets Revti and enquires about Balram. He further tries to manipulate Revti against Balram for choosing the wrong place for their marriage.

Balram is at Dev Lok and wishes to search for a divine place. Dev Raj shows him Nandan Udyaan for Krishna’s next project.

Rukmini tells her father about cutting Jarasandh in two parts to defeat him. His father tells her about Krishna’s friend Radha and wants to send a message to her.

Balram meets Krishna and tells him about Nandan Van. Krishna says how they can marry in Nandan Van as they are humans. Revti gets angry with Balram while he follows her.

It is all Krishna’s plan to make Jarasandh realize what fear is. Revti and Balram reach a place where Jarasandh is present with his army and get attacked.

Balram fights with Jarasandh and beats him. However, Jarasandh is unbeatable and his wound gets healed.

Upcoming Radha Krishn episode update: Rukmini is forced to attend her Swamvar while Radha sends the message to Krishna.

© Copyright tellybest.com, 2018 & 2019. All Rights Reserved. Unauthorized use and/or duplication of this material without written permission from tellybest.com is strictly prohibited.
Cached Saved on: Thursday 30th of January 2020 10:02:43 PMCached Disp on: Wednesday 19th of February 2020 11:48:38 AM