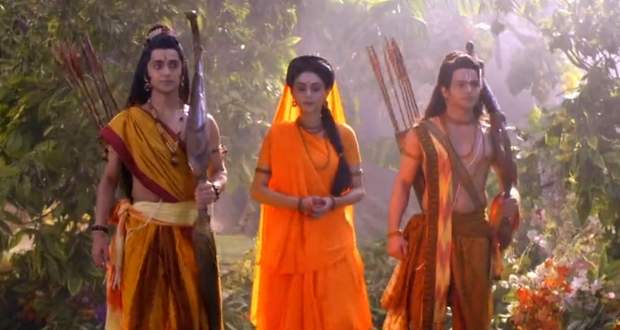 Today's RadhaKrishna 5 Oct episode starts with Krishna wanting Radha to eat so that everybody’s hunger subsides. Radha feels full after eating just one bite and Krishna says all the ladies in Barsana are full.

Krishna says it’s the magic of Sitafal. Krishna further starts with the story of Rama going to Vanvas because of Kaikayi’s wishes.

Lord Rama doesn’t want Sita to come along while Sita doesn’t want to stay away from him. Krishna further tells that in the forest Rama got hungry.

Sita saw a weird-looking fruit and tastes it before giving it to Rama. Rama names the fruits as Sitafal and Krishna eat the whole fruit.

Krishna says he will also call Radha as Kusum. Later, Krishna sends Balram to tell everyone that some magic is going to happen the next day in Barsana.

Kans decides to take the help of Mahamaya to bring Krishna in Mathura. Later, Mahamaya arrives on Kans’s request and gives a weapon to Kans for killing Krishna.

She says he can use the weapon only once. Meanwhile, Yashoda is worried about her haat while Krishna tells them to be positive and starts his story.

He tells the story of Rama and Sita being in Vanvaas for thirteen years. He further tells when last year was remaining, Shoorpanka came disguised as a beautiful girl and wished to marry Lord Rama.