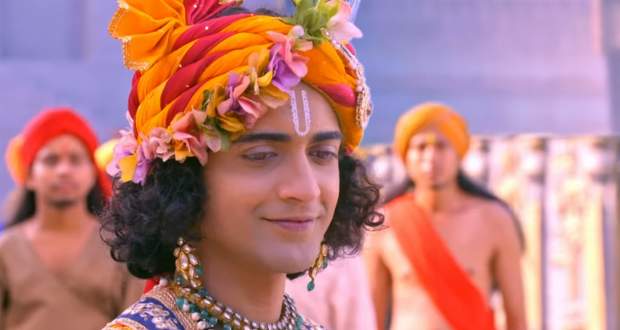 Today's RadhaKrishna 7 Dec episode starts with Krishna trying to fight the huge elephant. He pulls out one of its teeth and pushes it away. The elephant again attacks Krishna but he jumps on top of it to kill it with its own teeth.

Everybody praises Lord Krishna’s bravery while Krishna announces about the importance of Gajdant. Kans gets shocked to learn that the elephant is dead.

He wants Krishna to get tired of fights his Asurs. Meanwhile, Krishna announces that his end is near and with him, evil and greed will also end.

He further asks Kans to arrive as he is waiting to end him. At the same time, Kans declares that Krishna has to face his parents first.

Krishna opens the jail locks of all his prisoners and again asks Kans to come out. Later, King Ugrasen arrives to meet Krishna and everybody welcomes him.

Krishna and Balram take his blessings while he doesn’t want Krishna to end Kans. King Ugrasen wishes to keep Kans alive and give him one chance.

Ugrasen wants Krishna to show Kans the right path instead. Krishna gets in a dilemma and says the time has come for Kans’s end.

Radha arrives to help Krishna while she shows the way of love to Krishna. Radha wants Krishna to give one chance to their father-son love.

The people of Mathura don’t want Krishna to give Kans another chance. Krishna asks them to trust him and gives the last chance to Kans.

Upcoming Radha Krishn episode update: Krishna to kill Kans and end evil along with him.