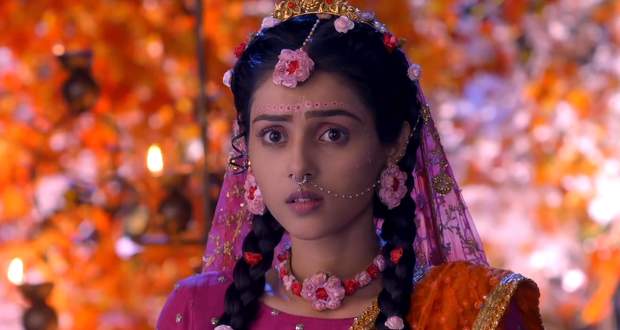 Today's RadhaKrishna 7 Sep episode starts with Balram asking what Krishna learned from his act. Krishna says he understood the lesson and again wants help from him.

Krishna successfully consoles Balram in meeting Chitra and himself leaves to meet Radha.

Krishna reaches the tent and starts painting. Radha comes outside and wishes to see what Krishna is making.

She enters the tent but Krishna hides the gift. Meanwhile, Ayan worries about Kans's actions and thinks he needs to put Radha in danger to save his mother.

Ayan is about to enter the tent but gets distracted by someone leaving the house late at night. He thinks it is Krishna and decides to follow.

Krishna continues with the story and says Laxmi got mixed in the waves of Sheer Sagar which weakened the powers of other gods.

Narayan instructed all other gods to do Samundra Manthan. Shukraycharya asks how he will carry out the process while Lord Vishnu says he will seek help from Mandar hill.

He brings the Mandar Hill near the ocean and calls Lord Shiva for help. They use Vasuki snake to bind the hill. Vishnu uses reverse psychology to trap Asurs. Mandar hill starts falling in the ocean and Vishnu changes his form to save it.

Later, Balram meets Chitra while Ayan thinks he is meeting Krishna. Ayan confronts them and says he knows what they are planning.

Upcoming Radha Krishn episode update: Krishna and Radha will celebrate Radha’s birthday and Laxmi will return from the ocean.