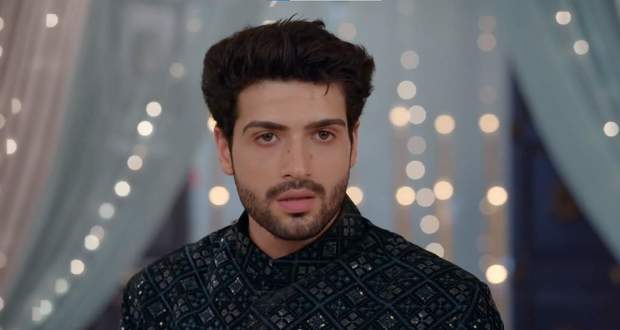 Kadambari asks him if she can see Gungun while Radha tells her that the pit is too deep and too dark.

Everyone starts to shout Gungun’s name while Gungun remains asleep.

Just then Radha sees the blood and becomes scared for Gungun.

Meanwhile, Damini asks Hriday what he has done to Gungun but he continues to escape the questions and tells Damini that Gungun has been taken care of and now she can focus on Mohan.

Damini tells Hriday that Gungun is no ordinary girl; she is Mohan’s daughter who will search for her everywhere and will not rest until he finds her.

Hriday tells Damini that he has sent Gungun under the earth while Damini becomes scared of Mohan’s wrath.

Meanwhile, Dulari comes to Radha’s Dadi and tells her that Gungun is trapped in a boring well.

Tulsi is aghast to hear Gungun’s news and tries to leave the house but is trapped by the holy thread.

Meanwhile, Kaveri goes to the site and begins to wail as if she is dead while Radha stops her from crying and tells her that Gungun is alright and nothing will happen to her.

Radha also asks Mohan to be strong and not to give up as his love will bring his daughter back.

Feeling strengthened, Radha and Mohan begin to call Gungun again while Tulsi also lies down on the floor and begins to call Gungun.

Soon Tulsi’s voice and Radha Mohan’s voice wake Gungun and she replies back.

A wave of relief spreads among all people while Radha assures Gungun that soon they will get her out.

Mohan wants to jump in but is stopped by everyone but he remains adamant until Radha explains to him that he might fall over Gungun and kill her.

Shekar also tells Mohan that he has called the rescue team and it is on the way.

Kaveri goes to update Damini about Gungun being alive.

Damini gets worried as Gungun will tell everyone about Hriday while Hriday tells her that Gungun only has a 3 per cent chance of coming out alive and she is not that lucky.

Damini holds Hriday’s collar and tells him to not be over-confident.

Kaveri calms Damini and takes her away while Hriday tells Lata that he will kill Damini if she again threatens him.

Meanwhile, the rescue team arrives at the market and sets up the equipment while the in charge introduces himself to Mohan and tells him that taking out Gungun will not be easy as the soil is wet and may fall over Gungun.