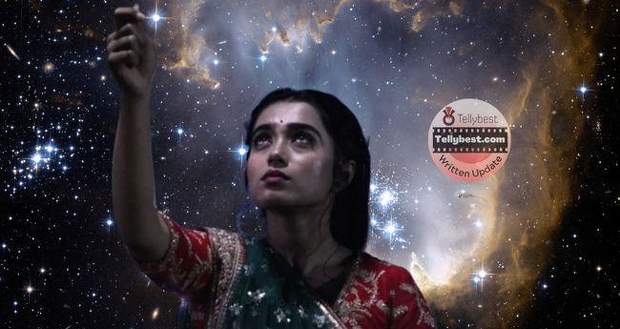 Today's Radha Mohan 10th January 2023 episode starts with Tulsi telling Radha to believe in her and support her.

Radha asks Tulsi about the promise that is stopping her from touching Gungun and Mohan.

Tulsi tells her that Mohan has told her to never come back into the life of his family or him and never try to harm them in any way.

However, Tulsi shocks Radha by telling her that she knows about her love for Mohan and the depth of it.

Meanwhile, Mohan is thinking about Radha and regrets sending her away.

Tulsi tells Radha that she has seen her love the same day she arrived in this house but she realised it too late.

Radha apologises to Tulsi for loving Mohan but Tulsi tells her that she does not need to apologise as her love is not selfish and she has accepted Gungun in that circle of love as well.

Tulsi tells her that they will have to stand together to stop this marriage for the sake of the happiness of their family.

Meanwhile, Kaveri makes fun of Tulsi telling her that her Mohan will soon get married to Damini.

However, her face changes from mocking to fearful when she sees the protective thread broken and runs to tell Damini.

Elsewhere, Tulsi asks Damini if she will help her fight against people who want to hurt their loved ones and thanks her when Radha agrees.

Radha tells her that she has already tried everything but has failed.

However, Tulsi tells her that only she can stop this marriage and this time she will be by her side.

Meanwhile, Damini tells Kaveri that Tulsi must have gone to Radha so they can stop her marriage.

She tells Kaveri that she will have to get married before Radha and Tulsi comes back.

In the meantime, Radha suggests telling everything to Mohan and then everything will be alright.

However, Tulsi tells her that it is of no use as everyone will think her to be mad and will not believe her.

Radha recalls that it is what will happen while Tulsi tells her that Damini is very dangerous and she alone knows it.

Radha looks curious and asks Tulsi if Damini has done something to her too.

Meanwhile, Kaveri tells Damini that Tulsi can tell Radha about her death.

In the meantime, Ketki tells Ajeet that they cannot let Damini marry Mohan because Damini will throw them out after their marriage.

Ajeet tells Ketki that they should leave before that time come and that he will work very hard to keep her happy and provide for her.

However, Ketki is not ready to leave as she has a right to the family property and a right to live here.

Meanwhile, Tulsi tells Radha that she will tell everything to her later but for now they will have to hurry as Damini must have known about her absence.

On being asked, Tulsi tells her that Radha will have to marry Mohan to become his wife and only then she can defeat Damini.

Radha tells Tulsi that it is wrong and asks her if Mohan will agree to it.

She tells her that Radha will have to channel Banke Bihari to end Damini and Kaveri’s evilness.

Radha once again tells Tulsi that Mohan will never agree to it because of his promise.

However, Tulsi tells her that she will have to force marriage on Mohan.

Tulsi asks her if she will be able to handle Mohan’s cold behaviour when she will marry him.

She tells him once she will marry Mohan, Mohan will still favour Damini and trust her because that is how he is built.

So is she ready to bear this Mohan Damini’s relationship even after her marriage to him?

© Copyright tellybest.com, 2022, 2023. All Rights Reserved. Unauthorized use and/or duplication of any material from tellybest.com without written permission is strictly prohibited.
Cached Saved on: Wednesday 25th of January 2023 11:51:47 AMCached Disp on: Wednesday 1st of February 2023 05:32:21 PM