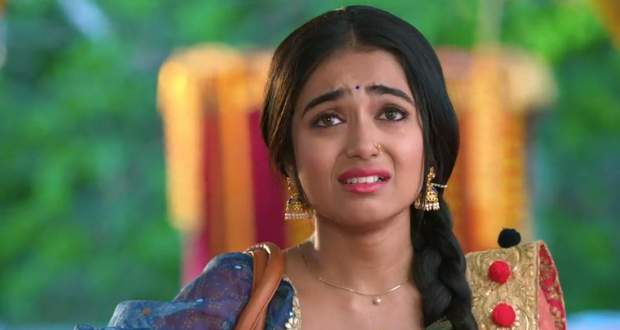 Today's Radha Mohan 10th May 2022 episode starts with Gungun crying while looking at her mother’s photo while Tulsi’s spirit wants to console Gungun but is bound by Mohan’s Kasam.

Meanwhile, Kaveri is expressing her disliking of Radha to Damini while Damini gets upset when Kaveri mentions that Mohan likes Radha.

She tries to change the topic by asking Kaveri how can Mohan let go of Tulsi’s brothers after they tried to kidnap Gungun.

Later when Tulsi’s brothers are talking to each other, Mohan hits both of them on the head and also warns them that next time he would kill them if they even look at Gungun.

When he tries to hit one of them with a chair, Tulsi’s mother appears in front of him and stops him.

Upset Mohan tells her that if she wants to think of Mohan as Tulsi’s murderer then it’s her choice. Before walking away, Mohan takes her blessing.

In Trivedi House, Radha is putting ice on her foot when Kaveri arrives and taunts her to leave. However, Mohan tells the whole family that Radha will stay here for his marriage.

Radha’s family tries to protest but Kadambari convinces them.

At the same time, Ketaki expresses her disappointment about Damini’s staying with Mohan. However, Rohan tells her that Damini is their future daughter-in-law so they should accept the fact.

As Rohan walks away, Ketaki mutters under her breath that she fears that day when Damini will be the owner of the Trivedi house.

Meanwhile, Gungun comes to Radha’s room and blames her for her failed escape. Gungun tells Radha that she will make her life a living hell in the house.

Later, Mohan notices Gungun’s hand and asks her what happened but Gungun refuses to tell.

Angry Gungun climbs up the almirah and when she is about to fall, Radha and Mohan catch her. Gungun calls Mohan a murderer and asks him to kill her too.

Radha says to herself that Gungun is just being childish and she thinks of gifting Mohan the Gita.

When she comes to his room, she finds Mohan’s flute. She starts remembering their childhood and promises herself that she will bring Mohan’s smile.

Later Radha tries to give Mohan the Gita but he explains that Gita won’t solve his life problems. Radha tries to reason with him but Mohan leaves the place making Radha sad.