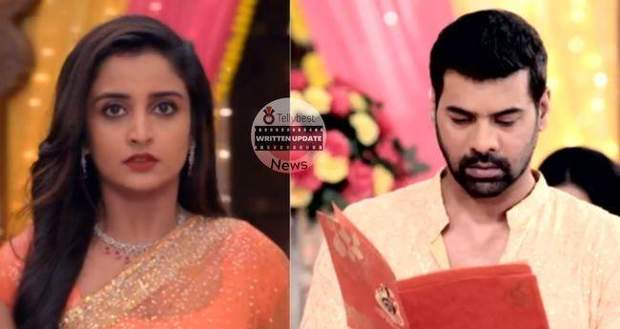 Shekhar tells Mohan that after the borewell incident and Tulsi's murder, their case has grown weak.

Radha is also worried as she knows that Gungun’s maternal uncle is not a good man.

In her room, Kaveri is puzzled at Gungun’s grandmother’s sudden custody appeal.

However, Damini tells her that it is not sudden.

Just then Rahul comes to their room and discloses Damini’s meeting with Gungun’s uncle and showed him the video of their secret meeting.

In the video, Damini calls Gungun a goose with golden eggs who will bring a lot of money to her maternal relations.

On being threatened, Rahul tells Damini to ditch her attitude or else he will show the video to Mohan.

In the meantime, Kadambari argues with Shekhar that it is their family that took Gungun out of the borewell.

Shekhar tells them that the judge will not take the matter of a child falling in a borewell lightly.

Meanwhile, Rahul tells Damini that he will not show this video to Mohan because he wants to join hands with her to destroy Radha who has made Mohan against him.

Damini silently mocks Rahul for not knowing that it was her and not Radha who has played him the other day.

Damini shakes hands with Rahul saying that with them working together, cutting off Radha’s hand will not be difficult.

At the same time, Kaveri expresses her concern about the Haldi ceremony the next day but Damini assures her that she has planned everything extensively and Haldi ceremony will happen.

Later, Mohan tells Kadambari that there will be no Haldi ceremony as his whole focus will be on saving Gungun.

However, Damini cleverly manipulates everyone saying that the Haldi ceremony will give a positive environment which will appease the lawyer and social worker.

Shekhar agrees with Damini and tells Mohan that if the lawyer and social worker approve of Damini as a prospective mother then the case can turn in their favour.

However, Ketki tells everyone that Gungun hates Damini and will never call her Mother.

Damini quietly mocks passing Radha for not being able to stop the marriage.

Just then, Mohan tells Damini that he has not forgotten how she insulted Radha a while back and asks her to apologise to Radha for her behaviour in front of everyone.

Damini feels humiliated but apologises to Radha, being stuck at the rock and hard place.

Mohan jokes to Gungun about looking sad while Radha asks him to not speak in English.

Gungun hugs Mohan and tells her that she does not want to leave him.

Tulsi is happy to see Gungun’s love for Mohan.

Later, Mohan tells Gungun that tomorrow she will have to show the lawyer and social worker that she is happy here and call Damini a mother.

© Copyright tellybest.com, 2022, 2023. All Rights Reserved. Unauthorized use and/or duplication of any material from tellybest.com without written permission is strictly prohibited.
Cached Saved on: Monday 21st of November 2022 06:34:20 PMCached Disp on: Thursday 1st of December 2022 02:41:39 AM