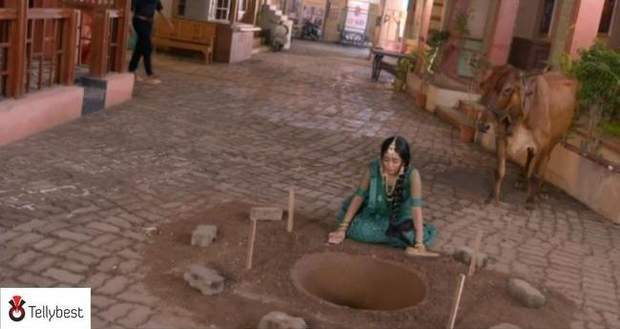 Today's Radha Mohan 11th August 2022 episode starts with the rescue team telling Mohan that they cannot go inside as the wet soil might slide and suffocate the child.

Just then, the media comes there and starts covering the incident while the police try to barricade them.

Radha and Mohan keep comforting Gungun with their words while Kaveri gives interviews to the media reporters due to her desire of being on the screen.

Meanwhile, Hriday calms Lata and tells her that he will end Gungun even if she comes out of the pit alive as he cannot let anyone find out about him.

The rescue team sends a small technical camera inside the hole which will help them locate the exact location of Gungun.

Everyone sees Gungun on the screen and the rescue team worries as the hole is 60 feet deep.

The media creates an uproar while Mohan demands to go inside the hole himself if the rescue team is scared to take the risk.

Radha gets hysterical asking the rescue team why it's impossible while Mohan calms her in front of everyone which Damini doesn't like.

Further, Radha tries to talk to Gungun through a microphone but fails to mask her sobs after which Mohan takes the mic and talks to comfort Gungun.

However, Gungun states that her hands are stuck and the mic slips from Mohan's hands due to him losing hope.

Back at the godown, Damini is scolding Hriday and Lata while he asks if the ghost is there too.

Damini gets worried wondering if Hriday has found out about Tulsi but calms down when he clears that he was talking about the CCTV cameras and microphones.

Kaveri annoyedly talks ill about Hriday and he leaves with Lata after glaring at them.

Meanwhile, Gungun innocently asks Radha if she's going to die while Radha cries hysterically and tells Gungun that she's going to cut off the TV to distract her.

Just then, the doctor arrives and checks Gungun through the camera after which he asks if Gungun can breathe properly.

The doctor says that it's a good sign while Mohan gets angry and shouts at the rescue team to save Gungun.

Further, the rescue team devises a plan to dig a hole opposite to the original hole with a tunnel connecting both the holes so that they can save Gungun.

However, Gungun starts feeling sleepy while the doctor worriedly says that they might not be able to rescue her if she falls asleep.