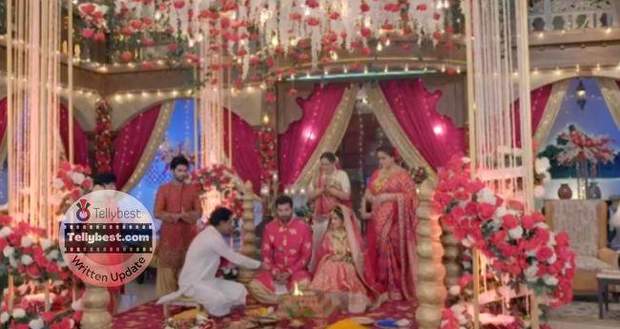 In reality, Damini whispers into Kadambari's ears to handle her husband or she is going to set herself on fire in the middle of the mandap.

Kadambari gets fearful as she recalls Damini's threats and tells Mohan to not step outside the mandap as she will handle Mr. Trivedi.

Radha tries to intervene while Kadambari silences her too by telling her to not interfere between her and her husband.

Kadambari asks her husband if has had too much alcohol and tries to take him inside the room while he removes his hand from her hand and says that he is drunk but someone made him drink the alcohol.

Mohan asks his father who made him drink while Radha thinks that now Kaveri and Damini's tactics will be exposed.

However, Mr. Trivedi points at Kadambari and says that she is the one who has made him an alcoholic.

Radha tells Mr. Trivedi to talk about what happened today while Ketki realizes that Radha is indicating something and asks her where she found Mr. Trivedi as he was not home the whole day.

Vishwanath says that he was not needed and was not even invited to his own son's wedding and again blames Kadambari for turning the family against him.

Mr. Trivedi further says that he is glad Radha brought him there to stop the marriage.

Mohan glares at Radha while Vishwanath tells him to not glare at her since she wants the good of the family only.

Kadambari asks Mr. Trivedi if he had lied about her being the perfect mother for Mohan.

Mr. Trivedi says that he did not lie that she was a perfect mother for Mohan but blames her for doing it intentionally to separate him from Mohan.

Kadamabari breaks down as she tells Mr. Trivedi that her God knows she never tried to separate them and asks what she should have done other than interfering when they used to fight all the time.

The family gets emotional hearing Kadambari's words while Mohan and Mr. Trivedi argue.

Mr. Trivedi tells Mohan to not make a mistake as Damini does not care about Gungun.

Radha tells Mr. Trivedi to talk about what happened today and he reveals that he does not remember anything.

Damini uses this opportunity and starts doing her drama by saying that she cannot see the disrespect happening to Kadambari and rebukes Radha.

Mr. Trivedi tells Mohan that Gungun will get away from him for his whole life if he marries Damini while Damini lies that she loves Gungun as much as she loves Mohan.

Gungun shouts that Damini hates her while Ketki also agrees with them.

However, Kaveri shouts and overpowers them while Radha tells them to let Mr. Trivedi speak.

Damini tries to divert the topic while Radha says that her plan won't work.

© Copyright tellybest.com, 2022, 2023. All Rights Reserved. Unauthorized use and/or duplication of any material from tellybest.com without written permission is strictly prohibited.
Cached Saved on: Wednesday 25th of January 2023 12:21:43 PMCached Disp on: Sunday 5th of February 2023 03:04:26 AM