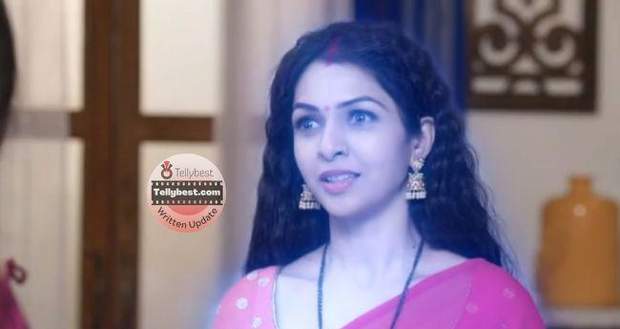 She tells her that he will not let her live peacefully and will be on the lookout to make her life miserable and will be miserable with her too and then Radha will have to stand by him.

Tulsi tells her that there will be many Agni Pariksha’s (tests) for her every day and she will have to bear it for Mohan until love takes over his anger.

She once again asks Radha if she is ready to be Mohan’s wife and bear all obstacles on the way.

Radha tells her that she is even ready to bear Mohan’s anger and even his hatred for his and Gungun’s happiness.

Afterwards, Tulsi tells her that Radha will have to do everything.

In the meantime, Radha’s father tells Radha’s Dadi that Radha is nowhere to be found.

Radha’s Dadi tells Radha’s father that Radha must have gone to Trivedi’s house after tricking them.

In the meantime, Radha calls Ketki asking her to send her the pictures that she has taken when she was getting married to Mohan.

Afterwards, Radha calls Kadambari asking her to allow her to come back.

Unaware of the call being recorded, Kadambari tells her that Mohan is getting married to Damini and she will have no place in his life or in his house.

Later, Radha calls Damini and asks her to not take Mohan away from her.

Damini thinks that Tulsi has not reached Radha yet.

She tells Radha that Mohan is hers and only hers as she has done so much to get him and she was the only one stopping her.

Radha tells her that Mohan is her husband as she has taken Phera with him whereas Damini becomes furious and tells Radha to stuff her Pheras and go kill herself.

After the call, Damini tells Kaveri that they cannot get careless and have to get married to Mohan before Radha does anything.

After a while, Radha calls Mohan and tells him that he should only have a place in his heart and life for her.

Mohan tells her to stop and that there is nothing between them so she should not call him ever again.

Later, Damini prepares for Tulsi and Radha’s attack and reties the protective thread on the door to stop Tulsi from entering her.

After that, she calls some goons to keep Radha from coming near the house.

Meanwhile, Tulsi presents Radha with her bridal dress that Mohan has buried.

In the meantime, Mohan is also getting ready to marry.

After some time, Tulsi finishes adorning Radha and turns her into a beautiful bride.

Later, Radha stops Tulsi from putting her Chunri on her as she only wants to wear the Chunri with Mohan’s name on it.

Meanwhile, Mohan looks at the wall where Tulsi's photo was and thinks that he feels that he has to leave his life behind to marry Damini.

He later refuses to tie the Pagdi thinking of Radha who promised to tie it for him.

Meanwhile, Damini tells Kaveri that Mohan’s name is not only written on her Chunri but in her life too and now no one can take away Mohan from her.

Later, Radha thanks Tulsi for letting her share her life with her husband and daughter and assures her that she will never try to replace her in their life.

Tulsi tells her that she is going to look after her own home as she has a special bond with Mohan and Gungun.

Radha looks lovingly at Tulsi and declares Tulsi as her elder sister.

© Copyright tellybest.com, 2022, 2023. All Rights Reserved. Unauthorized use and/or duplication of any material from tellybest.com without written permission is strictly prohibited.
Cached Saved on: Wednesday 25th of January 2023 02:35:51 PMCached Disp on: Wednesday 1st of February 2023 09:12:50 PM