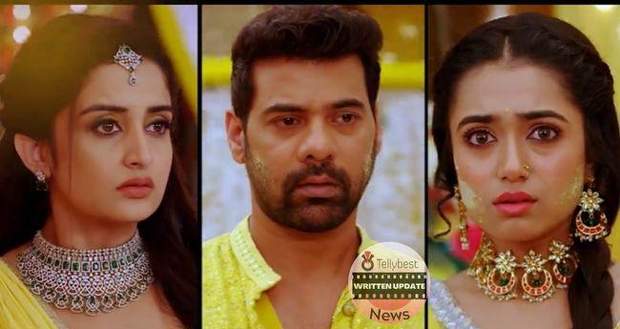 Today's Radha Mohan 11th October 2022 episode starts with Radha and Mohan explaining to Gungun that she will have to call Damini her mother and seeing no option, Gungun agrees.

After a while, Damini comes to Radha in the Kitchen to taunt her about having to convince Gungun to call her mother.

Radha tells Damini that she has failed to win Mohan and Gungun so she should not boast about her victory.

At the same time, Radha threatens Damini that she will not let this marriage take place if Damini’s intentions towards Mohan and Gungun are not good.

However, Damini in her overconfidence is assured that there will be no obstacle in the Haldi ceremony and Mohan will become her forever.

The next day everyone is rejoicing and dancing at the Haldi ceremony function when Gungun sees Mohan and Damini coming down together and runs away from there.

Later, Kaveri asks Ajeet to play a rocking number so she can dance some more as she is the bride’s mother.

Mohan and Radha are not pleased to see the overexcited Kaveri especially when there is so much tension.

After a while, Kadambari tells Kaveri that she should not have organised the ceremony with so much grandeur.

Radha also disapproves of this much pomp and tells them that Gungun is already so scared and this much splendour will further scare her.

Damini loses control over her temper at Radha’s interference and tells everyone that just because Gungun is scared does not mean that rest of them do not enjoy their happiness.

However, realising her mistake Damini cleverly turns the objective of the pomp to Gungun’s benefit as it will give a cheerful look to the lawyer and social worker.

Shekhar also favours Damini’s point of view but Mohan walks out of there saying he cares more about Gungun than the looks.

Radha tries to follow Mohan but Damini stops her and demeans her by questioning her presence in her function.

Rahul also insults Radha and tells her to go and help Dulari.

Meanwhile, Damini tells Radha to not interfere in their family matters as they will deal with Gungun’s matters on their own.

In the kitchen, Gungun finds Radha crying and tells her to confess her love for Mohan else Damini will marry Mohan and make their life miserable.

However, Radha tells Gungun that at this moment, keeping her in the house is most important.

Tulsi praises Radha's devotion and sacrifice as a mother and prays for Haldi rasam to happen between Radha and Mohan.

Later, Damini explains to Kaveri that she has employed Gungun’s custody case to put pressure on Mohan so that he marries her without fuss and once she is married she will never let Mohan win the custody case.

This will send Gungun away forever and leave no choice for Radha but to leave the Trivedi house.

After a while, Damini tells passing Gungun to get dressed for the function and listen to her mother.

Gungun jerks Damini’s hand away and tells her that she hates her for hurting Radha.

© Copyright tellybest.com, 2022, 2023. All Rights Reserved. Unauthorized use and/or duplication of any material from tellybest.com without written permission is strictly prohibited.
Cached Saved on: Monday 21st of November 2022 06:30:16 AMCached Disp on: Saturday 10th of December 2022 03:18:42 PM