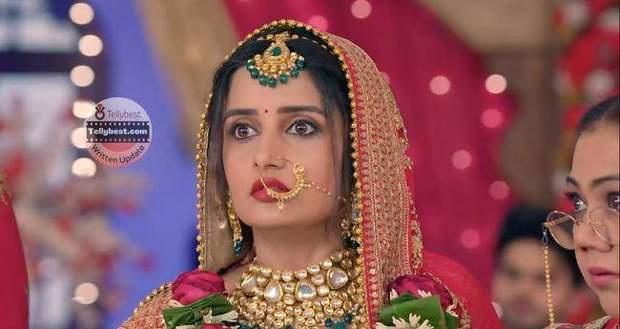 Today's Radha Mohan 12th December 2022 episode starts with Radha telling Damini that this game about twisting the truth will not work today as her truth will come out one way or the other.

Mohan tells them both to be quiet and not fight as Trivedi Ji is enough to cause chaos.

Damini innocently tells Mohan to not misbehave with Trivedi Ji.

Meanwhile, Trivedi Ji tells Mohan that this is what is happening with him that he is made a showpiece in the house and has ruined his life.

He calls Kadambari a witch which angers Mohan to such an extent that he pushes Trivedi Ji and tells him that he has spent his life in alcohol while she looked after the business and brought him up to be responsible.

He tells him that what Kadambari has done for him has indebted him and has given him the love of both mother and father.

Radha tries to intervene but Mohan stops her saying that she has disappointed him and tells her that he will marry Damini.

Meanwhile, Trivedi ji falls on the floor unconscious while Mohan tells him to leave him be.

Radha tries to stop him but he does not listen and tells her that he will not listen to anyone now.

Mohan walks back and tells Pandit Ji to start the rituals while Kadambari tells Ajeet to take Trivedi inside.

Damini becomes happy that now no one can stop this marriage.

However, Damini was proven wrong as Pandit Ji announces that this marriage cannot take place now.

On being asked he tells them all that now the auspicious time for marriage has passed now and will come back after four hours.

At the same time, Radha, Gungun and Tulsi thanked God for giving them more time.

Meanwhile, Kaveri tells Damini to do something else Radha will definitely find a way to stop the marriage.

Damini tells Pandit ji since half of the rituals are done let’s finish the rest of it. However, Kadambari tells them that she cannot take anymore risks with this wedding.

She tells everyone that everyone will come back after four hours.

After a while, Kadambari tells Damini that she knows that it was all her plan and asks her why she did it.

She asks her where were Radha and Trivedi for so long.

Damini tries to be innocent but Kadambari tells her to not act in front of her and leave Radha alone as Mohan will marry her.

However, Damini tells her that Radha will not sit quietly until and neither can she until she finally gets married.

In the meantime, Kaveri tells Kadambari to go and look after Trivedi Ji and she will take care of Damini.

Meanwhile, Radha tries to talk to Mohan but he tells her to leave him alone and shuts the door but Radha’s hand comes in between and gets hurt.

Mohan immediately comes out and looks at Radha’s hand while Damini becomes scared that Radha will now tell Mohan everything and rushes to stop her but Tulsi makes Damini and Kaveri fall.

Meanwhile, Mohan tells Radha that his mother has to hear so much just because of her and he will not tolerate all this anymore.

Seeing Mohan leave, Damini smiles wickedly and tells Radha that now Mohan will not listen to her as she has pressed his raw nerve.

Radha tells her to not get too excited as she will only need five minutes of Mohan’s time to tell him the truth which she will get many times in these four hours.

Kaveri and Damini are afraid of this becoming a reality and thinks of doing something to help themselves as Banke Bihari only helps Radha.

Gungun who is eavesdropping tells Damini that she will not let her spoil Radha’s plan today.

Meanwhile, Radha is knocking at Mohan’s door asking him to listen to her because she will not leave until he hears her.

However, Mohan tells her to keep waiting outside as he will not open the door.

© Copyright tellybest.com, 2022, 2023. All Rights Reserved. Unauthorized use and/or duplication of any material from tellybest.com without written permission is strictly prohibited.
Cached Saved on: Wednesday 25th of January 2023 02:57:43 PMCached Disp on: Sunday 5th of February 2023 03:27:08 AM