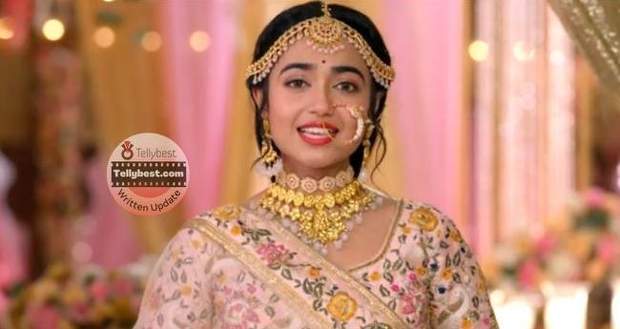 Today's Radha Mohan 12th January 2023 episode starts with Tulsi telling Radha that she will be Saarthi and while Radha will be her Arjun.

In the meantime, Damini is planning to throw everyone out of the house after her marriage and will rule this Trivedi mention.

Just then Damini’s goon calls her telling her that they have found Radha while Damini instructs them to kill her.

Later, the goons surround Radha but Tulsi stops and begins to beat them mercilessly.

One of the goons recalls Damini’s instructions and lights a fire that makes Tulsi helpless.

Meanwhile, Mohan and Damini come to the Mandap again while Mohan is lost in Radha’s thoughts and wants Radha to return.

Later, Tulsi tries to fight the goons despite the fire and tells Radha to run while she keeps them distracted.

Elsewhere Kadambari asks Mohan to proceed to the Mandap while Gungun tries one last time to stop Mohan.

However, Mohan tells her to not ask him for anything that he can not give.

Later, Mohan hesitates to put a garland on Damini when Radha’s Dadi and father come looking for her.

Damini looks frustrated seeing them back while Mohan asks them why have they come back.

Radha’s father tells Mohan that Radha tricked them while the tire got punctured.

Radha’s Dadi tells him that they thought Radha has returned here.

In the meantime, Gungun tells Mohan that they should go and search for Radha.

She also accuses Radha’s Dadi and her father to be part of Radha’s plan.

Mohan gets angry at Damini for accusing Radha’s family but she threatens to jump in the fire if he dares to put another step outside this mandap.

Elsewhere Radha is being followed by goons and falls on the ground hitting her head on the stone.

The goons leave Radha on the floor hoping her to be dead.

Later, Tulsi comes to her and tries to wake Radha telling her that she needs to wake up or else Mohan will marry Damini.

Tulsi prays to God for help and just then a horse and a buggy stand some distance away.

Meanwhile, Pandit Ji asks Mohan and Damini to take their place and continue to perform rituals.

Gungun and Mohan’s hearts are with Radha hoping for her safety.

Later, Tulsi puts Radha on a Buggy and tells her that she will always be by her side.

© Copyright tellybest.com, 2022, 2023. All Rights Reserved. Unauthorized use and/or duplication of any material from tellybest.com without written permission is strictly prohibited.
Cached Saved on: Wednesday 25th of January 2023 06:55:58 PMCached Disp on: Wednesday 1st of February 2023 09:36:17 PM