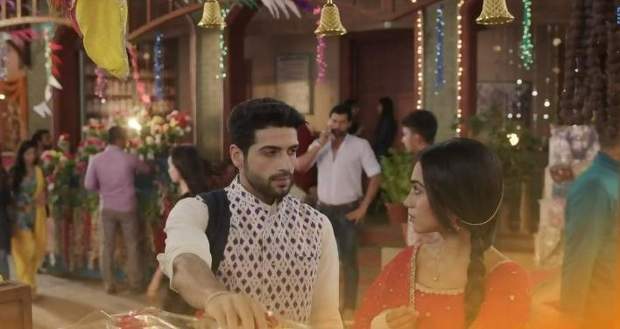 Today's Radha Mohan 12th July 2022 episode starts with Mohan slamming the note in front of the seller and taunts the guy by asking him why he's bothering Radha.

Mohan tells Radha that they should leave while the guy stops them for their leftover change but Mohan insults him by telling him to keep the change in English.

Meanwhile, at the Trivedi house, Kaveri gets a hold of the wig and other items to take it outside and burn them before Mohan returns.

Radha and Mohan get back inside the car while Mohan tells them that they bought the dresses for God.

However, Dadi smirks at Mohan and tells him that it doesn't matter as her work is done which worries Mohan.

Back at the Trivedi house, Damini sees Kaveri preparing to burn the wig and rushes to stop her but Mohan reaches there before her.

Mohan questions Kaveri why she's creating a fire in the backyard while Damini distracts him and takes him inside so that he doesn't see the wig.

Further, inside the house, Damini tells Mohan to take her to shop for a saree while Mohan thinks that it's for Radha and tells her to wait until the marriage is fixed.

Hearing that, Damini gets angry and states that she was talking about herself as they are getting married also.

Damini scolds Mohan saying that he always thinks about Radha while Mohan says that Radha is just that type of person who stays on the person's mind all the time.

Further, Radha goes to bring her God idol while Dadi informs Kadambari about Mohan's planning in the market and scolds him.

Afterwards, Dadi reveals that she has found the perfect man for Radha while Radha comes there holding God's idol in her hand with the new dress she bought recently.

Just then, Dadi's friend Lata enters along with the same guy who split the dress set with Radha holding an idol of Goddess Radha.

Dadi introduces him as Hriday and informs everyone that Lata has taken a liking to Radha and wants to make her their daughter-in-law.

Mohan and Gungun try to stop them saying that they shouldn't be too fast with the marriage.

However, Dadi reveals that she had intended to take Radha to the market so that she and Hriday can meet and get to know each other.

Further, Damini and Kaveri talk about getting the marriage fixed today itself while Tulsi thinks to do something.

Meanwhile, both Mohan and Gungun talk badly about Hriday and make fun of his name.

Back in the living room, Lata asks about Mohan and comments that he has also taken a liking to Radha.