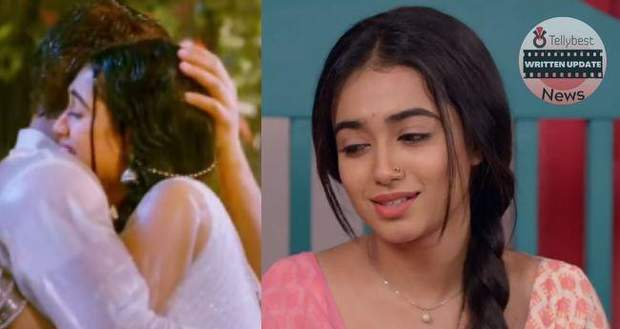 Today's Radha Mohan 12th September 2022 episode starts with Damini threatening Kadambari with her death and sending Mohan to Jail for murdering Damini by burning her just like Tulsi did.

She dramatically shows her headlines after headlines of the newspaper where Mohan is accused of killing his fiance like his wife.

In some headlines, Mohan is accused as Woman basher.

Having gone through a similar experience before Kadambari could feel the gravity of threats.

Feeling frightened, Kadambari requests her to not do anything of the sort.

Meanwhile, Damini pours kerosene on herself and tells Kadambari that Radha and Mohan will definitely come together but on her dead body.

Meanwhile, Radha, Mohan and Gungun are praying in the temple.

Kadambari manages to take the matchstick away from her and promises to marry her to Mohan so that Mohan is not thrown in jail.

Damini threatens Kadambari with various tools to commit suicide if she dares to Go back on her promise.

In the meantime, Mohan prepares a soup for Radha and Gungun and insists on Radha drinking it.

Gungun tries to tell Mohan that Radha wanted to confess her love but Radha distracted them both so that she couldn’t say anything.

In the meantime, Kadambari comes back feeling scared of Damini’s threat and feels sad to see Radha, Mohan and Gungun together.

Mohan once again asks Radha what she wishes to tell him but Radha is hesitant.

Damini also sees Radha about to confess her love and makes Kadambari falls to distract them.

Mohan and Radha rush to Kadambari to help while Kadambari loses consciousness thinking of Damini’s threat.

Later, the doctor tells Mohan that Kadambari has high BP which worries Mohan.

Damini comes to Kadambari and reminds her of threats in veil concern making Kadambari more frightened.

Tulsi who has been observing all this understands that Kaveri and Damini have certainly done something to Kadambari.

After a while, Kaveri expresses her worry for Radha who might confess her love to Mohan.

However, Damini smiles cunningly and tells Kaveri that she has taken care of the matter as well as she has tempered with Radha's water bottle.

At night, Radha wakes up from a sleep hearing the window make a noise.

As she goes to close the window, she sees Mohan bathing in the rain and goes to take him away.

Seeing Radha in an umbrella, Mohan takes it and throws it away making Radha soak in rain.

Radha looks at him with a smile while Mohan tells him that he feels exactly how she feels for him.