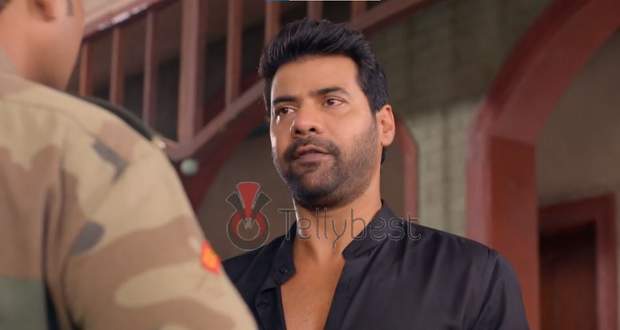 Today's Radha Mohan 13th August 2022 episode starts with Mohan taking the door and standing with it on the opening of the whole.

Meanwhile, Kaveri berates Damini for bringing Hriday into their life which has become a huge problem for them.

She also says that as soon as Gungun will come out she will tell Mohan about Hriday.

Damini tells Kaveri that Guruma has told her that Radha Mohan's Kundali are linked and she needed Hriday to break that link.

She also consoles Kaveri saying that this rain will not stop for long which means Gungun will not survive.

Meanwhile, Kadambari proudly tells everyone that Mohan has taken the form of Lord Krishna to save her daughter.

Mohan’s father and brother support the door from both sides earning Mohan’s respect in times of need.

Meanwhile, Kaveri tells Damini that Mohan will do anything for Gungun even if he will have to stand there for years.

Kaveri also tells her that Radha and Mohan are coming closer while dealing with Gungun’s problem because Radha is standing at the opening ever since Gungun is found there.

Damini shouts in a rage saying that she will never let Radha and Mohan get together.

Meanwhile, Hriday is amazed to see Mohan standing with the door on his head.

However, Lata is worried about exposure and suggests that Hriday leave before Gungun is saved.

Hriday assures her that Gungun will not come out alive and tells Lata that there is a ghost in the house and tells her about the scene in the kitchen.

Seeing Lata scared, Hriday tells her that Tulsi cannot leave the house and he will use that to their advantage when the time will come.

In the meantime, Radha tells Gungun that Mohan has stopped the water from coming to the hole because he loves her a lot.

Seeing the camaraderie between Radha and Mohan, Damini panics about Radha and Mohan getting together and tells Kaveri about telling Mohan about Hriday.

Kaveri talks sense into Damini, telling her that Hriday will also tell about them and then Mohan will kill them.

Kaveri suggests to Damini to trap Hriday in a way that their name stays out of it and then Mohan will do what he wants.

Hriday slow claps Kaveri for trying to backstab him and shows her all the evidence of their communication with him.

Hriday tells Damini that if she tries to double cross him then he will take them with him.

Both Damini and Kaveri look shocked at the trap they have fallen into.

Hriday shoos them out where the whole family is so that no one suspects them.

© Copyright tellybest.com, 2020, 2021. All Rights Reserved. Unauthorized use and/or duplication of any material from tellybest.com without written permission is strictly prohibited.
Cached Saved on: Saturday 1st of October 2022 11:23:38 PM