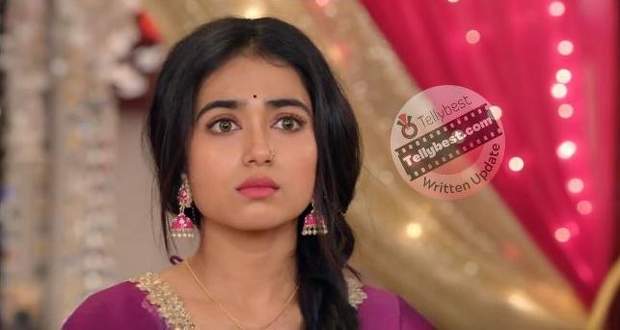 Today's Radha Mohan 13th December 2022 episode starts with Radha beating a plate at Mohan's door so that he opens the door which reminds him of Tulsi.

A flashback shows how lovingly Mohan convinces Tulsi to open the door and calls himself "Joru Ka Gulam".

In the present, Tulsi asks Mohan to open the door while Radha keeps on beating the plate.

Damini and Kaveri come to stop Radha while Gungun thinks to stop them.

Kaveri stops Radha while Damini manipulates her words and says that she has hurt Kadambari when Mohan comes to open the door but stops listening to Damini.

On the other hand, Ketki and Rahul console Kadambari while Kadambari says that Vishwanath hates her.

Kadambari justifies that she never distanced Mohan from his father while Rahul taunts her that she kept Mohan very close to her and distanced her other children from her.

Meanwhile, Kaveri twists Radha's hand and stops her from banging on the door.

Ketki says Damini is the real problem whereas Rahul speaks against Radha.

At the same time, Gungun hits Kaveri and Damini will toy guns whose balls make Damini and Kaveri fall on the floor.

However, Mohan is not able to hear anything as he has put on loud music in his room but when the noise increases too much he comes out of the room to see.

Mohan notices the toy ball gun in Radha's hand which she took from Gungun earlier while Kaveri and Kaveri cash the situation and put the blame on her.

When Radha says that she did not do any of this, Mohan supports her and says he knows she will not do anything such.

Later, Radha tries to talk to Mohan but Damini stops her and later both Damini and Radha start gibbering which irritates Mohan.

Radha asks Mohan to listen to HIS Radha while Damini says Mohan is hers'.

However, Mohan says that he will decide who has rights over him.

Later, Mohan asks Radha why she wants to stop the marriage and where she was during the marriage.

Kaveri with a tense expression says that their cover will be blown today.

Before Radha could speak, Damini butts in saying once she is married to Mohan Radha will have no reason to stay in the house.

Gungun says that Damini will never become her mother which she can write a thousand times in her notebook.

When Damini keeps on interrupting again and again, Mohan asks why is Damini stopping Radha and if she is hiding anything.

Damini then eyes Kadambari and reminds her of the warning that she will commit suicide if her marriage did not happen.

Fearing the danger, Kadambari asks Mohan and Radha to stop the drama as only half an hour is pending to the auspicious hour of the marriage.

She says she will listen to Radha and he should freshen up.

Later, Kadambari talks to Radha inside the room while stopping Gungun at the door.

Kadambari asks Radha if she is stopping the wedding because she loves Mohan.

Radha says that her love is as pure as Radha Rani loves Banke Bihariji and it is selfless.

Radha says she is doing all of this not to gain Mohan but to stop Damini.

However, Kadambari shows her fear that Mohan might get into danger because of all of this.

© Copyright tellybest.com, 2022, 2023. All Rights Reserved. Unauthorized use and/or duplication of any material from tellybest.com without written permission is strictly prohibited.
Cached Saved on: Wednesday 25th of January 2023 04:11:22 PMCached Disp on: Wednesday 1st of February 2023 06:10:10 PM