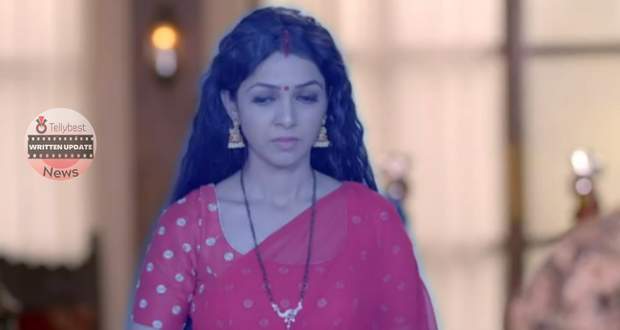 Today's Radha Mohan 13th November 2022 episode starts with the doctor telling Radha that Mohan might have internal injuries which can prove critical for him and tells them to have faith in God.

Damini loses control and threatens the doctor to not leave Mohan in the hands of God or else she will treat him badly.

The doctor feels offended and tells Damini to not misbehave with him despite being worried.

Kadambari tells Damini to compose herself and that nothing will happen to Mohan.

Meanwhile, Tulsi and Dulari are waiting for everyone.

Dulari remembers leaving the veneration plate on the table.

Soon, the lit lamp on the plate burns the frame of Mohan’s photo which Tulsi observes and becomes worried about.

Nurses and doctors work on Mohan to wake him up while everyone is anxiously waiting to wake up.

Meanwhile, Gungun feels scared at the thought of losing Mohan.

In the meantime, Kadambari cries for Mohan while Ketki tries to comfort her and feels guilty for being the reason Mohan risked his life.

Ajeet tells Ketki to not talk like that as Mohan cannot leave them to die.

In the meantime, Radha observes everyone's losing hope and decides to encourage them so that their hope will help in fueling Mohan’s recovery.

After a while, Radha tells encouraging words to everyone one by one and tells them to not lose hope and stay strong for Mohan.

After a while, Radha goes to Gungun to comfort her but Gungun tells her that she understands her pain as well and that she loves Mohan a lot.

Gungun also tells Radha about Mohan’s advice to her where he told her that small-small tests in life prepare them for big exams.

On the other hand, Kaveri tells Damini that Radha is doing what she should be doing and might replace her position as Bahu in the house.

In the meantime, Dulari comes and throws water on the flame and gets scared thinking that it may be a sign that something inauspicious is happening.

Tulsi also gets worried thinking about it and prays for everyone’s safety.

Later, when Gungun is assuring Radha that Banke Bihari will not let anything happen to Mohan, Damini comes to Mohan and request Radha to pray for him as she is scared for Mohan’s life.

Radha wipes Damini’s tears and assures her that nothing will happen to Mohan.

Damini hugs Radha and tells her that only she can understand what she is feeling and that they both want Mohan to get well.

Seeing Damini cry her heart out evokes sympathy in everyone while Ketki tells Rahul that Damini is still dramatising the situation despite Mohan’s critical condition.

However, Rahul tells Ketki that Damini is not acting but really loves Mohan.

In the meantime, Kadambari comforts both Radha and Mohan and tells her that Mohan will come out of this problem as a winner.

Later, Dulari gets a call from Ajeet who updates her about Mohan’s condition and begins to cry hearing about the critical condition that Mohan is in.

Tulsi anxiously waits for Dulari to speak up and in anger displaces the vases from the table.

Dulari gets scared and addresses Tulsi to not do anything to her or else she will be of no use to anyone.

© Copyright tellybest.com, 2022, 2023. All Rights Reserved. Unauthorized use and/or duplication of any material from tellybest.com without written permission is strictly prohibited.
Cached Saved on: Monday 21st of November 2022 08:26:28 AMCached Disp on: Thursday 1st of December 2022 01:47:07 AM