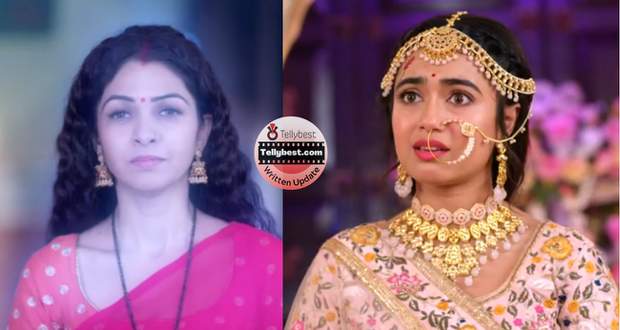 Today's Radha Mohan 15th January 2023 episode starts with Mohan telling Radha that she has come to give him pain and has achieved it and there is nothing left to do now.

Mohan tells Radha to go away from here.

However, Radha refuses to leave despite Mohan's sternness.

Mohan grabs her hand and walks her out of the mandap but Radha pretends to fall on the floor.

She touches Mohan’s feet to apologise to him for what she is going to do next.

Mohan once again lifts her and drags Radha and pushes her to leave.

Radha falls on the floor and at the same time police arrive there.

Radha turns to Mohan asking him why is he doing this to her.

Mohan looks surprised to hear Radha while she continues telling him that she is ready to hear his scolding and get his beating too.

Crying hard she requests him to not throw her out of the house and insult his wife like this.

Mohan and others are shocked to hear Radha call herself Mohan’s wife.

Radha tells the inspector that this was the injustice she has told her about and now only she can get justice for her.

The police inspector picks Radha up and asks everyone what is happening there.

Radha tells the inspector that Mohan has married her of his own will and left her and now he is marrying Damini.

She tells her that if this marriage happens then her life will be ruined forever.

However, Kadambari tells Radha that there is a limit to lying and she should think about their family reputation.

However, the police officer rebukes Kadambari and tells her to not scare Radha.

Radha tells Mohan that all she knows is that he is her husband and she cannot live without him.

Tulsi tells Radha that she understands her situation but she will have to bear Mohan’s hatred for Mohan.

Damini tells Radha to shut up while Mohan tells Radha that he cannot imagine that Radha’s innocence was nothing but a facade but in reality, she just wants to act on her infatuation.

Radha once again apologises to Mohan and tells him that she also never imagined that he will throw her out of the house one day after using her.

Mohan looks disgusted at Radha and tells her this is the reality that Damini has always been telling him about but he ignored it.

However, now he knows that she is nothing but a liar and deceiver.

He tells Radha that her reasons for doing this are to get him but he can assure her that she will never get him.

Radha’s determination begins to shake and she steps back thinking she cannot do this to Mohan and this family.

However, Tulsi stops her and tells her that Arjun has similar feelings at the time of war and then Lord Krishna explained to him that it is wrong to back down from responsibilities.

She tells Radha, similarly,  it is her responsibility to save this house from Damini and paints a horrible picture if Damini marries Mohan.

She tells her that only she can stop this happening and if she backs out now she will regret it for her whole life and blames herself for this family's ruin and sometimes one has to hurt their loved ones to save them from greater hurts.

Radha’s resolve strengthens on hearing Tulsi and she returns back to face Mohan.

In the meantime, Mohan tells her that he will never forgive her for what she is doing to him.

Later, Mohan asks the inspector to ask Radha if she has any evidence to prove that she is his wife.

© Copyright tellybest.com, 2022, 2023. All Rights Reserved. Unauthorized use and/or duplication of any material from tellybest.com without written permission is strictly prohibited.
Cached Saved on: Wednesday 25th of January 2023 09:05:16 PMCached Disp on: Wednesday 1st of February 2023 08:19:02 PM