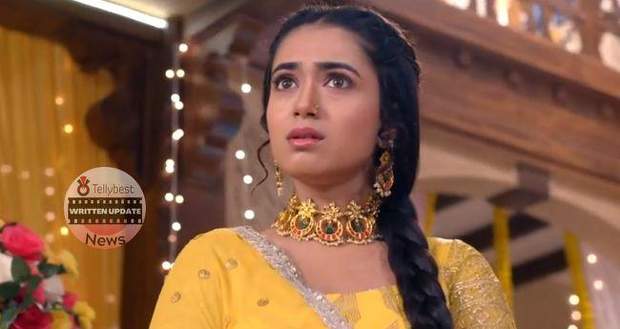 Today's Radha Mohan 15th October 2022 episode starts with Gungun telling Kadambari that she makes the tastiest Kheer but Radha made the kheer on Tulsi’s birthday and celebrated it with her when nobody remembered it.

She tells Ajit that Radha prepares food for her, gives her ice cream, prepares her for school, puts on a black dot to save her from evil eyes, and plays with her just like a mother does.

Radha tells her to stop but Gungun continues telling them about the bedwetting episode and how Radha spent the night with her without feeling dirty.

She asks each one of them if they would have done the same.

Gungun also reminds Mohan that she used to hate him but Radha brought them closer and shows her how much he loves her.

She tells Mohan that he is lucky to have Kadambari as a stepmom and that if her mother had been alive then she would have been like Radha.

Gungun tells Mohan to marry Radha if he really loves her and gives her a mother of her choice.

Meanwhile, everyone looks at him in shock while Damini and Kaveri watch Gungun with resentment.

Mohan kneels down and hugs Gungun while Kaveri is worried that Mohan might say yes.

In the meantime, Mohan tells her that he knows that nobody can love her like Radha and she would be the best mother but they cannot ruin Radha’s life for their selfish reasons.

He tells her that Damini wants to marry him and that is why he is marrying her but Radha deserves someone better.

Gungun tells Mohan to ask Radha and asks her to tell Mohan whether she has any problem marrying Mohan.

Radha looks at Mohan, recalling all the past moments with him while Mohan looks at her expectantly.

Tulsi also tells Radha to confess her love for Mohan.

However, Radha remains quiet while Gungun looks at her expectantly.

Just then Damini begins her drama by calling out Radha an artist who has taught Gungun so much.

Mohan tries to stop Damini but she tells him to not ask her to stop as her marriage is online.

Damini accuses Radha of brainwashing Gungun so that she can reach Mohan.

Gungun tells her that Radha never plays games like her.

Damini accuses Radha of manipulating Gungun to get her wish fulfilled while Mohan asks Damini what reason Radha possibly has.

Damini stops midway, realising her mistake in telling Mohan about Radha’s love for him.

Mohan tells Damini that she has gravely misunderstood Radha and apologises to Radha for being accused and insulted.

Radha tells Mohan to not insult her love for Gungun by expressing gratitude.

Meanwhile, Gungun once again tells Mohan to marry Radha because together they are perfect.

© Copyright tellybest.com, 2022, 2023. All Rights Reserved. Unauthorized use and/or duplication of any material from tellybest.com without written permission is strictly prohibited.
Cached Saved on: Monday 21st of November 2022 06:56:37 AMCached Disp on: Thursday 1st of December 2022 12:17:33 PM