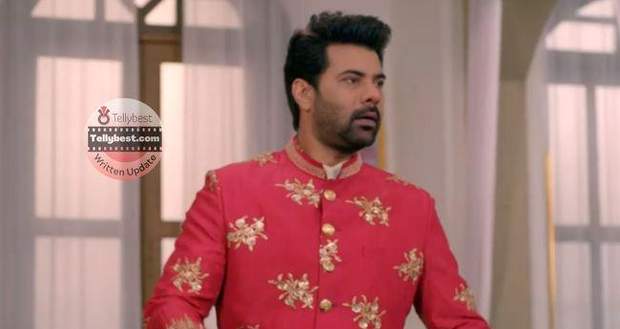 Today's Radha Mohan 16th December 2022 episode starts with Damini hitting Radha on the head while Mohan searches for her.

Radha falls to the ground with a spinning and aching head and Damini drags her away to a corner.

Meanwhile, Mohan asks Gungun where Radha is as she is looking for her.

Gungun gives an attitude to Mohan telling him that she does not want to talk to him.

However, Mohan tells her that he is looking for Radha so he can listen to her.

Hearing that Gungun tells her to look in opposite directions and signal each other.

Later, Mohan comes to Damini’s room while she is hiding Radha.

Seeing the opportunity, Tulsi opens the latch but Damini has hidden Radha by then.

Meanwhile, Trivedi Ji apologises to Kadambari for spewing nonsense under the influence of alcohol.

Kadambari cries at the apology but her tears dry off hearing Trivedi repeat the same thing about Damini not being right for Mohan.

Later, Mohan comes inside Damini’s room asking for Radha while Tulsi tries to drag Radha out of hiding but Damini sees it first and goes to stand beside Tulsi.

As Damini tries to send Mohan away, Tulsi makes the night lamp drop so Mohan can see Radha.

Mohan goes to clean it so it does not cut anyone, but he could not see Radha lying behind the headboard.

Meanwhile, Damini closes her eyes in fear at Mohan seeing it and makes him uncomfortable by asking to do her button.

Later, someone again knocked at the door but Damini smiles seeing her as if it was Kaveri.

Seeing Radha unconscious, Kaveri begins to babble and tells Damini to throw her into the jungle.

However, Damini tells her that for now, they will throw her away in a big suitcase that Kaveri has bought to steal valuables from the Trivedi's.

Later, Gungun is searching for Radha so that she can tell Mohan about Damini.

Meanwhile, Shekhar tells Mohan that Radha loves her but Kadambari stops him and scolds him for filling Mohan’s head with lies.

Later, Damini is admiring her face in the mirror when Tulsi thinks of getting some help but abandons the idea as she cannot leave Radha alone.

Meanwhile, Mohan is pissed to see Trivedi Ji in the wedding mandap while Kadambari tells him that he has apologised.

Just then Gungun comes to Mohan asking him to help her find Radha.

However, Kadambari stops him and tells him that she has sent Radha away from home so she cannot attend the wedding.

Gungun is sure that Radha will not leave without telling her but Mohan tells her that he cannot disobey his mother despite loving Radha a lot.

Elsewhere, Damini tells Radha that she will throw her out today.

Meanwhile, Pandit Ji asks to call the bride while Gungun thinks of finding Radha to stop this marriage.

Later, Gungun finds a broken glass outside Damini’s room and goes to look for Radha inside the room.

However, Damini spots Gungun in the mirror and decides to finish her game as well.