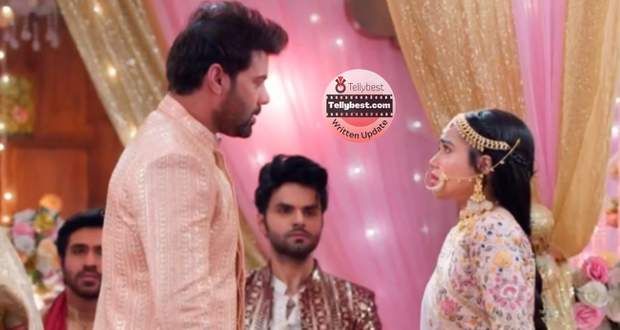 Today's Radha Mohan 16th January 2023 episode starts with Mohan asking Radha if she has any proof to prove that she is married to him.

A police officer also tells her that she will need proof to prove that she has married Mohan.

Radha looks at Tulsi and deriving courage from her tells Mohan that she has proof of marriage.

Radha asks Mohan to forgive her as she is helpless.

Mohan does not understand Radha’s apology and tells her that he thinks she has really gone mad.

However, Radha shows Mohan the wedding photographs that Ketki has taken a few hours ago and tells Mohan that she has all the evidence to prove their marriage.

Mohan recognises the picture and looks pleadingly at Radha to not stoop so low.

Meanwhile, Radha tells him that he can falsify their marriage but she cannot.

She shows the photograph to the police officer who confirms that Radha looks very much married to Mohan.

Damini tells the police officer that Radha is a liar and so are these photographs.

Damini also explains to them that Radha is involved in one-sided love with Mohan and wants to marry Mohan but when Mohan refused to marry her then she has lost her mental balance.

Later, Radha also plays the audio of the conversation with Ketki where she sympathises with Radha for what has happened to her in this house.

However, Ketki denies Mohan’s marriage to Radha but Radha tells her that Ketki is afraid of Mohan.

Radha tries to ask Ketki’s help and tells her to tell the truth for once and then everything will be all right.

However, Ketki is feeling used by Radha’s betrayal and asks Radha why is she telling the lie using her friendship to get her purpose.

Rahul also tells Ketki that this is what he has been telling her from day one to not trust Radha.

Radha feels ashamed at using Ketki but Tulsi tells her that this is not the time to look down but it is time to stare confidently into their eyes.

In the meantime, the Police inspector asks Mohan if he accepts Radha as his wife after seeing the photo or not.

Mohan shouts angrily and tells the officer that Radha is not his wife and he has not married her.

Meanwhile, Kadambari also tells the officer that Radha is lying and Mohan is not married to her.

Just then a voice asks Kadambari what the truth is.

Later, they introduce themselves as women from the Mahila Mukti foundation who has come here at Radha’s request.

Radha looks relieved to see them and explains to them everything between crying and requesting them with folded hands to save her from the injustice.

The woman assures Radha that injustice will not prevail with Radha tonight.

© Copyright tellybest.com, 2022, 2023. All Rights Reserved. Unauthorized use and/or duplication of any material from tellybest.com without written permission is strictly prohibited.
Cached Saved on: Wednesday 25th of January 2023 10:10:01 AMCached Disp on: Tuesday 31st of January 2023 06:34:36 PM