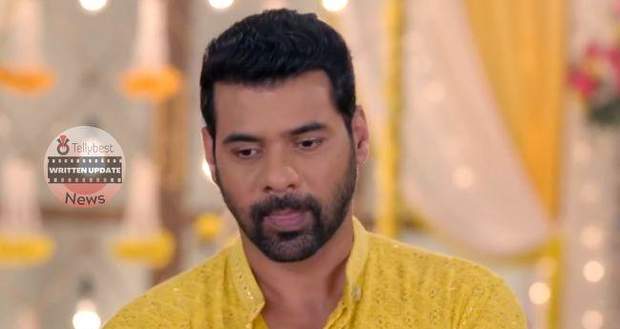 Today's Radha Mohan 16th October 2022 episode starts with Gungun telling both Mohan and Radha they three look good as a family together.

Radha looks at Mohan and takes Gungun away while telling Mohan that she will take care of her.

On the other hand, Damini takes out a gun from her drawer angrily and thinks that she will end both Radha and Gungun's lives as they are thorns in her life.

However, Kaveri comes there just then and tries to stop Damini saying that she will have to go through her dead body to pass the room.

Blind in her anger, Damini points the gun toward Kaveri shocking her.

However, before Damini can leave and do something stupid, Kaveri stops her and explains to her how her actions will lead her to jail.

On the outside, Ketki tries to explain to Rahul that Radha is the correct choice as Gungun's mother but he also refuses saying that Radha has blinded them with her act.

Meanwhile, Gungun gets upset in her room saying that no one heard her speech while Radha tells her that she got very happy how a mother gets happy when her child calls her.

Gungun requests Radha to become her mother while Radha tries to convince her by saying that Mohan is marrying Damini.

Elsewhere, Ketki states all the instances where Radha became selfless for Gungun and asks if he's doing this because he doesn't want to give Tulsi's place to anyone else.

Meanwhile, Gungun retorts by saying that Mohan might love her too but Radha says that it is not possible as he would have said it at least once if he did love her.

Ketki tries to make Rahul understand that even Tulsi would have wanted to get Mohan married to Radha and not Damini.

Rahul gets emotional as he recalls how Tulsi used to feed him and mended his broken relationship with Mohan.

However, he also recalls how Mohan slapped him for Radha and leaves from there telling Ketki to not talk to him if she wants to talk about Radha.

On the other hand, Damini tries to make Radha angry by talking badly about her family while Radha says that she is silent only because she hasn't found any evidence against her till now.

However, once she will find any evidence, she will be sure to stop the wedding.

Meanwhile, Kadambari sees her husband Vishwanath drinking again and asks him why he has started drinking once again.

He tells her that he agrees with Gungun that Mohan should marry Radha and not Damini.

Kadambari recalls her nightmare and says that Mohan should marry Damini.

Vishwanath tells Kadambari that she separated him from Mohan and that Damini will do the same by separating Gungun from Mohan.

Elsewhere, Damini thinks that she will teach a lesson to Radha for threatening her.

© Copyright tellybest.com, 2022, 2023. All Rights Reserved. Unauthorized use and/or duplication of any material from tellybest.com without written permission is strictly prohibited.
Cached Saved on: Monday 21st of November 2022 03:26:08 AMCached Disp on: Friday 9th of December 2022 04:57:25 AM