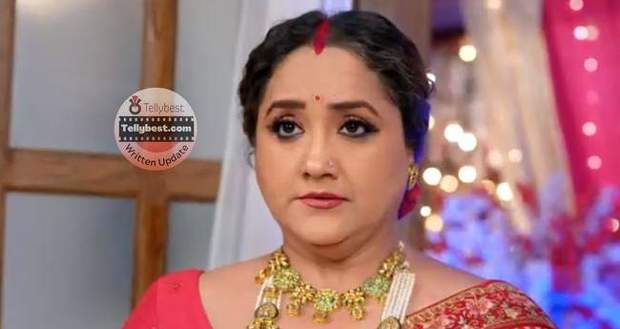 Damini spots Gungun standing outside and drags her inside the room after covering her mouth.

Damini tells Gungun that she will not be able to tell anyone if she does not go to them and decides to get rid of her along with Radha.

Tulsi tries to save Gungun from Damini’s trap but gets thrown out after clashing with a thundering bolt.

Meanwhile, Mohan continues the rituals at the mandap while thinking about Radha’s words that she said to him.

Mohan remembers how Radha asked him not to marry Damini as he does not love her.

Gungun’s image of not wanting Damini as her mother also flashes in front of Mohan’s eyes which makes him jittery.

At the same time, Damini proceeds to hurt Gungun but she kicks her on the foot and escapes from there.

Damini runs after Gungun and stops her from moving further by holding onto her dupatta.

Tulsi continues to warn Damini that she will kill her if she harms Gungun but fails to get near her due to Damini’s bracelet.

Mohan comes to his senses and asks Kadambari to come outside for a moment as he wants to talk to her.

Kadambari anxiously follows Mohan and asks him why he suddenly wants to talk to her.

Mohan says that he feels something is going wrong and feels like Gungun’s good is not in marrying Damini.

Kadambari gets nervous and assures Mohan that everything will be all right and she will talk to Gungun about being present at the wedding.

Kaveri hides in a room with her suitcase thinking that Tulsi will come after her to kill her.

In the meantime, Gungun continues to escape from Damini’s hold and drops some beads on the floor on which Damini slips and hits her head on the wall.

Ketki and Rahul talk about how they do not want Damini to be Mohan’s wife while Ajeet asks them to accept the truth.

Damini falls to the floor unconscious which brings relief to Tulsi as Damini can no longer hurt Gungun.

Gungun says that bad things happen with bad people and tries to pull Radha out from the corner.

With Tulsi’s powers, Gungun brings Radha out and says that even though she reveals the situation to everyone, no one is going to believe her.

Gungun begins to think about what she should do with Damini and Radha to make things right.

© Copyright tellybest.com, 2022, 2023. All Rights Reserved. Unauthorized use and/or duplication of any material from tellybest.com without written permission is strictly prohibited.
Cached Saved on: Wednesday 25th of January 2023 10:46:49 PMCached Disp on: Wednesday 1st of February 2023 08:46:06 PM