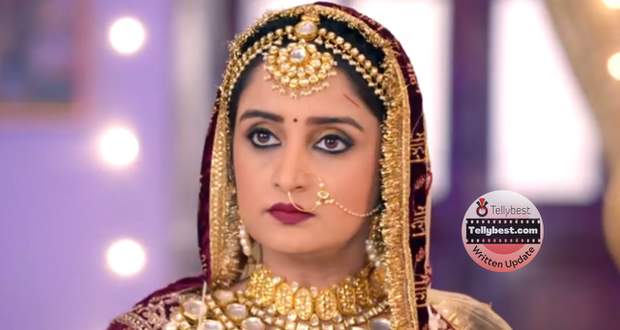 Today's Radha Mohan 17th January 2023 episode starts with Radha requesting the women of the foundation to save her while the women assure her that they are with her and she need not fear.

They come to Damini and tell others that Damini needs to be taught a lesson as she is trying to ruin Radha’s life.

Damini tells everyone that Radha is lying but Radha plays Damini's recorded call where Damini tells her that her Pheras mean nothing to her and she should go and die somewhere.

Radha also plays Kadambari’s voice call where she tells her that there is no place for her in this house as Damini is marrying Mohan.

Kadambari is shocked to hear her voice recorded and shames Radha for using their words against them.

Meanwhile, Mohan is also disgusted at Radha’s change of attitude and how she changed colour like a scorpion.

Meanwhile, Tulsi tells Kadambari that she is with Radha now as all Radhas who have people like Damini and Kaveri need Tulsis in their life.

Radha tells Kadambari that this has not happened in a night, she is only asking for her rights. Is it wrong to fight for love?

She tells them that she always considered this family her own but she was subjected to injustice at every turn, even her own husband threw her out of the house and that too on Damini’s instigation.

The woman tells each other this woman needs thrashing and her face blackened just like her black deeds.

Kaveri and the inspector try to stop them but they are uncontrollable.

Seeing Mohan interfere, the inspector stops Mohan and tells him that he cannot interfere in this matter.

While Mohan and the inspector argue, the woman prepares to blacken Damini's face.

Damini looks at those black hands with fear but she could not save herself and screams.

Mohan rushes to her help and drags Damini amidst them but he was too late.

Later, the women are ready to blacken Mohan’s face too but Radha comes in between telling them that a woman never lets anything happen to her husband.

Mohan tells the inspector to arrest the woman but she tells her that she should arrest him and Damini and maybe all his family.

Mohan asks the inspector why she is so sure that Radha is telling the truth and not lying.

The inspector reminds Mohan of Radha’s role in saving Gungun from two life-threatening situations which shows that Radha loves their family a lot.

Kadambari also tells the police that even though the proof suggests otherwise but truth is that Radha loves Mohan and wants to marry Mohan.

Radha goes to Kadambari and tells her not to favour her niece over her and she promises to always be nice to her.

Radha hugs Kadambari and quietly apologises to her that she is doing all this to save Mohan.

Just then the women from the foundation move to beat Kadambari but Radha stops them saying that she is her mother and she cannot let anything happen to her.

Radha also directs their anger to Kaveri saying she is the one manipulating Kadambari.

The woman captures Kaveri and beats her for conspiring against an innocent girl.

Gungun and Tulsi enjoy the show while Mohan asks them what they want.

They tell Mohan to not marry Damini which angers Damini and she shouts at them for believing the lies Radha is feeding them.

The inspector also tells Damini that Radha has evidence to support her claim.

Mohan tells them the evidence is false while Ketki tells the inspector to ask Radha’s Dadi.

Radha’s Dadi looks at Radha furiously and tells the inspector that her granddaughter is lying.